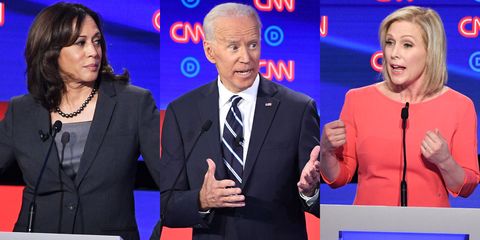 By the time the most telling moment of Wednesday night’s Democratic Debate arrived, most people at the Kamala Harris watch party in downtown Iowa City had headed for the door.

The debate—part two of round two—was in its fourth hour, and almost all of the twenty or so attendees at the dark, aggressively air-conditioned gay bar had had enough. Six hours, two nights, and twenty candidates is a lot.

But then, two women went in on Joe Biden.

It began with a question about the gender pay gap, and about Sen. Kamala Harris’s plan to fine companies that don’t pay women equally. The question was first posed to entrepreneur and long-shot candidate Andrew Yang. Then, when Sen. Kirsten Gillibrand was asked if she thought Harris’s plan would work, she called for “a broader conversation about whether we value women, and whether we want to make sure women have every opportunity in the workplace.”

And then she turned to Biden.

“When the senate was debating middle class affordability for child care, he wrote an oped. He voted against it, the only vote… he believed that women working outside the home would ‘create the deterioration of family.’ He also said that women who were working outside the home were ‘avoiding responsibility.’ And I just need to understand, as a woman who’s worked my entire career as the primary wage earner, as the primary caregiver… am I, serving in Congress, resulting in the deterioration of family because I had access to quality, affordable day care? I just want to know what he meant when he said that.”

Biden’s response: That was a long time ago, and he didn’t want to give tax breaks to parents who were making a comfortable income.

Gillibrand didn’t let up, running through stats on how many women work outside the home, and how, for most of them, their income is essential to their family’s survival. Biden, visibly irritated, touted his record on preventing sexual violence, and implied that Gillibrand was being disloyal and opportunistic:

Then, Harris got in on the action.

“Listen, I mean, talk about now running for president and changing your position: on the Hyde Amendment, Mr. Vice President, where you made a decision for years to withhold resources to poor women to have access to reproductive healthcare, including women who were the victims of rape and incest. Do you now say that you have evolved and you regret that? Because you have only, since you've been running for president this time, said that you had— you in some way would take that back or you didn't agree with the decision that you made over many, many years.”

Again, Biden tried to defend himself, insisting he supports “a woman’s right to choose” and would move to protect that right through legislation rather than the courts. But Harris wouldn’t let it go.

It was just a few minutes out of an hours-long verbal slugging match, but it was telling: This is what it looks like when six women run for president at the same time.

It was just a few minutes out of an hours-long verbal slugging match, but it was telling: This is what it looks like when six women run for president at the same time.

Which means that she’s always been “the woman,” tasked with being the sole representative of her gender, as though any one person can do that. She’s been the only one subject to the impossible sexist double standards of American politics—Be tough, but gentle! Put your family first, but never choose your kids over your job!—and expected to be excellent where men are permitted to be mediocre.

Not anymore. Now, the primary candidate for the Democratic nomination isn’t a man by default, and it’s entirely possible that it never will be again.

This is not to say that all the women running are laudable or up to the job. As Rosenberg wrote, “I wouldn’t vote for every woman running for president in the Democratic primary. But I’m grateful for the presence of every single one of them. Equality isn’t a single perfect human woman winning the presidency: It’s a bunch of flawed women being considered genuinely plausible contenders for the post.” Just like men are.

It’s also a bunch of women holding men’s feet to the fire on their positions on women’s rights.

If Gillibrand had been the only woman on stage, it’s easy to imagine the debate moving on quickly and without much comment. Instead, Harris echoed Gillibrand’s insistence for an answer from Biden. It was reminiscent of the amplification strategy: Women teaming up to repeat each other’s ideas in meetings to ensure their contributions are heard.

Of course, Harris and Gillibrand are rivals, and they weren’t teaming up out of their goodness of their hearts: They were trying to undermine Biden’s frontrunner status, and boost their own positions in the polls.

If it was a moment of sisterhood, it was a strategic and self-interested one. It was also kind of thrilling.

Audrey Bailey, a 32-year-old ELL teacher from Iowa City who showed up to the Harris watch party in a T-shirt that read AMERICA NEEDS TEACHERS, said she found Harris’s passion, and her grasp of policy, inspiring.

“When she speaks, I can say, ‘yes, I’m on board with that!’ I love what she says but I also love how she says it.”

Bailey’s friend and fellow teacher, Stacie Smith, also of Iowa City, said she’s drawn to Harris’s “I got this” vibe.

Senator Warren at during the debate on Tuesday, July 30.
Justin SullivanGetty Images

“I’ve followed her for a long time, watching her in congressional hearings. She listens, but when she talks she’s prepared and can back up what she says with data and the big picture context of why it matters. I can’t argue with that.”

The night before, at a Warren watch party across town, one woman, Lina, told me that she was torn between Massachusetts Senator Elizabeth Warren and Harris. “She’s just awesome,” Lina said of Warren. “She’s super sharp, she knows her stuff. I think she and Harris would both be good against Trump.” That’s something you can be now: torn between two viable female candidates...or more.

As things got more heated on Wednesday night, Smith and Bailey were sympathetic. “She seems irritated, but not flustered,” said Smith of Harris, “which I would be too, I appreciate that. She’s not a robot. She has the passion to defend her record.”

“They’re most threatened by her,” Bailey added, as we took a breather outside the bar. “She’s the one to beat.” Not the woman to beat, just the one.

More on the Democratic Presidential Primary
Cory Booker Gets Real About Reproductive Justice
The Cost of Child Care Is Crushing U.S. Families
Chloe Angyal Chloe Angyal is a journalist who lives in Iowa; she is the former Deputy Opinion Editor at HuffPost and a former Senior Editor at Feministing.
This content is created and maintained by a third party, and imported onto this page to help users provide their email addresses. You may be able to find more information about this and similar content at piano.io
Advertisement - Continue Reading Below
More From The 2020 Presidential Election
Kamala Harris Is "Momala" to Two Stepchildren
This Is How Much Joe Biden Is Worth
Advertisement - Continue Reading Below
This Is How Much Kamala Harris Is Worth
Joe Biden's Grandkids Are Among His Biggest Fans
Joe Biden's Son Beau and the Story of His Death
Kamala Once Clashed With Biden Over Abortion
Where Kamala Harris Stands on Gun Control
Unraveling the Latest Kamala Harris Controversy
Who Is Donald Harris, Kamala Harris's Father?
Kamala Harris Is Married to Her Number One Fan