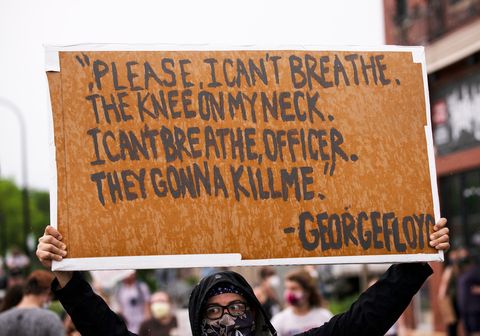 Update, June 1, 10:15 a.m.: The Minnesota Freedom Fund has raised $20 million and is encouraging people to donate directly to George Floyd’s family and other local organizations, especially those that are Black- and BIPOC-led, instead.

Update, May 29, 2:27 p.m.: Derek Chauvin, the Minneapolis police officer seen pressing his knee on George Floyd's neck, has been arrested and charged with third-degree murder and manslaughter.

By now, you've heard the news. On Monday, May 25, George Floyd, a 46-year-old African-American man, died in custody after being taken in by the Minneapolis police for reportedly using a counterfeit bill at a grocery store. Outside of the grocery store, Floyd was handcuffed and pinned to the ground by officer Derek Chauvin, who pressed his knee into Floyd's neck, while other officers—Thomas Lane, Tou Thao, and J. Alexander Kueng—stood by and watched, ignoring onlookers begging for Chauvin to get off of him.

A bystander's video began circulating across the internet on Tuesday morning, showing footage of Floyd begging for his life and the officer not budging. "I can’t breathe," Floyd said. "Please, I can’t breathe." (Eric Garner spoke the same words in 2014 while being held in a chokehold by the NYPD.) After a few minutes, Floyd became motionless while Chauvin continued to dig his knee into him.

I don't need to tell you what happened next.

George Floyd is yet another reminder of the racism that is embedded in our country. (Let's not forget Ahmaud Arbery, Breonna Taylor, and the countless other Black people who are killed on a daily basis, fueled by the racism displayed by the Amy Cooper's of the world.) The four police officers responsible for Floyd's death were fired, but it is not enough. Protests are happening across the country. Minneapolis is burning. Even CNN reporters are getting arrested. For those of us who are not currently in the streets, we must continue to amplify our voices—especially those of us born with white privilege—and educate those around us, once again, that Black Lives Matter.

Protesters outside of the 3rd Police Precinct on May 27, 2020 in Minneapolis, Minnesota.
Stephen MaturenGetty Images

If you're struggling to figure out how to help right now, here are a few ways to do so:

Sign this Change.org petition, below, which includes over 10 million signatures.

The petition calls on Minneapolis Mayor Jacob Frey and District Attorney Mike Freeman to arrest and charge all officers involved in Floyd's death for police malpractice.

Take matters into your own hands and pressure DA Mike Freeman to charge and arrest all of the officers responsible for Floyd's death.

Maasai Godwin created a link that will take you to a pre-written email template that you can send to Minnesota officials. Head to her Instagram and click on the TinyURL link, then simply plug in your name, city, state, and hit send. It takes less than a minute to do.

Text "FLOYD" to 55156 and sign the Color of Change petition.

The petition currently has over 3 million signatures, demanding justice for George Floyd.

Donate to the Minnesota Freedom Fund.

If you have the means to donate, the Minnesota Freedom Fund is helping bail out people who are getting arrested while protesting. Over the weekend, the organization stated that it's no longer actively soliciting donations (it raised over $20 million) and encourages people to donate directly to Floyd's family and other local organizations, especially those that are Black- and BIPOC-led.

Donate directly to George Floyd's family, who set up a GoFundMe.

"My family and I watched in absolute horror as the now infamous and horrifying video began to spread quickly throughout social media," writes Philonise Floyd, the brother of George. "What we saw on that tape left us shell shocked; a white Minneapolis police officer kneeling directly on my brother's neck, obstructing his ability to breathe."

All donations for Gianna Floyd, the daughter of George Floyd, will be placed in a trust for Gianna and her mother, according to the GoFundMe bio.

Donate to Reclaim the Block.

Donate to the NAACP.

The NAACP's goal is to "secure the political, educational, social, and economic equality of rights in order to eliminate race-based discrimination and ensure the health and well-being of all persons." You can also donate directly to the NAACP legal defense fund to help fight racial injustice.

This link makes it easy to split donations to bail funds across the country, including the Philadelphia Bail Fund and Chicago Community Bond Fund.

Donate to the Innocence Project.

Donate to the ACLU.

Black Visions Collective creates powerful campaigns to create longterm success for Black people in America. "By building movements from the ground up with an integrated model, we are creating the conditions for long term success and transformation."

Donate to the LGBTQ+ Freedom Fund.

The LGBTQ+ Freedom Fund helps post bail to secure the release and safety of LGBTQ people and raises awareness about LGBTQ overincarceration. The organization also works with the second largest number of prisoners with HIV.

Reach out to your Black and POC friends during this time. Let them know that they are seen and heard—do not ask them to educate you. Here are a few helpful articles on how to be a white ally:

Rachel Epstein Associate Digital Editor Rachel Epstein is the associate editor at Marie Claire, where she covers culture, lifestyle, and politics.
This content is created and maintained by a third party, and imported onto this page to help users provide their email addresses. You may be able to find more information about this and similar content at piano.io
Advertisement - Continue Reading Below
More From Politics
Cecile Richards on Mobilizing Women to Vote
Amy Coney Barrett Is Poised to Be a SCOTUS Nominee
The Best Way to Honor RBG Is With Your Vote
In Maine, Sara Gideon Could Help Flip the Senate
Flight and Fight
How to Help Demand Justice for Breonna Taylor
Your Guide to the 2020 Presidential Debates
Inside Sarah McBride's Historic State Senate Run
You Can Now Wistfully Text Obama "I Miss U"
Sorry, Melania: You'll Never Be Jackie Kennedy