Shocker alert: Before President Franklin D. Roosevelt took office, the first 100 days of a new White House administration wasn't exactly newsworthy. Before the 32nd president took his seat in the Oval Office in 1933, those 100 days were just, well...days. It wasn't until Roosevelt passed 76 laws in those first months while also dealing with the country's crippling financial status (and hosting those famous fireside chats) that people started to realize a lot could go down if the right candidate meant business. So, now that Joe Biden is president-elect, you might be wondering: What does he have planned for his first 100 days?

Ahead, we broke down everything the former Delaware senator has promised to do upon being sworn in as POTUS, according to his campaign's "vision" and post-election press interviews. From reversing Trump's immigration laws to rejoining the Paris agreement, here's what you can expect to see happen during Biden's first three months in office.

Biden and his choice for VP, Kamala Harris, have spoken regularly both before and after the election about the need to implement a more robust plan than the last administration did to tackle the worsening coronavirus pandemic. Their primary focus will be on expanding access to and trust in the COVID-19 vaccine, the latter of which they hoped to encourage by both receiving their first doses of the vaccine on national TV.

"People have lost faith in the ability of the vaccine to work," Biden said on CNN in September. "Already the numbers are really staggeringly low, and it matters what the president and vice president do."

Additionally, on his first day in office, Biden will sign an executive order mandating mask-wearing on federal property and during interstate travel, and will also begin taking steps to rejoin the World Health Organization, from which Trump withdrew the United States in July 2020.

Related Story
This Is the Democrats' Plan to Defeat COVID-19

Biden's Plans for the Environment:

The Biden-Harris campaign initially offered the following agenda items as part of its plan to address climate change:

Since being elected, their administration has further refined these goals: According to Biden's chief of staff, Ron Klain, rejoining the Paris Agreement will be another of the executive orders Biden signs on his first day in office. In his first few days as POTUS, he's also expected to cancel the Keystone XL pipeline's permit, which has long been criticized as a sizable contributor to climate change.

Biden's Plans for the Economy:

In addition to his campaign's plans to create cabinet-level working groups to promote union organizing and collective bargaining in the public and private sectors, Biden also plans to spend his first 100 days enacting policies to boost the U.S. economy back to its pre-COVID levels.

The "American Rescue Plan" allots $1 trillion for COVID-related economic support, including $1,400 stimulus checks (which, in addition to the $600 checks that began distribution in early January, will reach the $2,000 total proposed by Congressional Democrats); an extra $400 a week for those receiving unemployment benefits; plus billions in small business relief, state-level support, federal nutrition programs, and support for childcare providers. Furthermore, the rescue plan also proposes to raise the federal minimum wage to $15 an hour, more than double the current $7.25 hourly rate.

Beyond the COVID relief program, Biden's Day One executive actions will also reportedly include a request that the Department of Education extend its pause on student loan payments and interest.

Another key executive order that Biden will enact within his first few hours in office is the reversal of Trump's "Muslim ban" that restricted travel from several majority-Muslim nations. In subsequent days, he's also expected to end Trump's national emergency declaration at the U.S.-Mexico border, which allowed for millions of dollars to be funneled straight to the construction of a border wall without requiring Congressional approval.

After taking these immediate actions, Klain has said that Biden will also spend his first day in office sending an immigration bill to Congress. The bill will reportedly include an eight-year path to citizenship for undocumented immigrants to the U.S., with a fast-tracked process for the "Dreamers" currently protected by the Deferred Action for Childhood Arrivals, or DACA, program.

Elsewhere in the Biden-Harris campaign's immigration policy plan were pledges to: 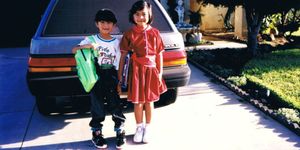 My Secret Life as an Undocumented Immigrant

As an avid proponent of sensible gun control legislation, Biden and his administration have repeatedly stated their goals to introduce such legislation as early as possible upon taking office. They'll begin by asking the FBI to identify loopholes in current background check rules, then ask Congress to close those loopholes, roll back legal protections for firearm manufacturers, and restructure the government agencies currently overseeing gun-related legislation.

During their campaign, Biden and Harris also outlined further tenets of their gun control plan, including reauthorizing the Violence Against Women Act, which would keep firearms out of abusers' reach by closing "boyfriend" and "stalking" loopholes that continue to allow access to guns by abusive ex-boyfriends and stalkers with previous convictions. They'll also invest funds in federal programs that will support and provide more trauma-informed and culturally responsive care for survivors of gun violence and domestic abuse.

Biden's Plans for the LGBTQ+ Community:

Biden has outlined plans to improve government recognition and support of the LGBTQ+ community. For one, he has pledged to direct federal resources to help prevent violence against transgender women, focusing on trans women of color. He has also declared his intent to pass the Equality Act, which prohibits discrimination based on sex, sexual orientation, and gender identity. If passed, he would enlist his Cabinet to enforce the act across all federal departments and agencies.

Plus, yet another of Biden's Day One executive orders will see him reverse the Trump Administration's ban on transgender people serving in the military.

On his first day as president, Biden plans to direct his nominee for Secretary of Housing and Urban Development, Marcia Fudge, to lead a task force that will ask mayors and other elected officials to detail what they believe could make housing available for everyone in their communities. The report would be due within 100 days. The same day, he'll also take executive action to extend the nationwide ban on evictions and foreclosures.

Additionally, if confirmed as Secretary of Housing and Urban Development, Fudge will also be asked to review current federal housing policies to make sure they apply to Biden's "housing first" approach. This document will also look into homelessness assistance grants and the results they can provide to communities. 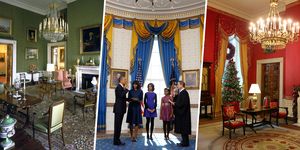 How Past Presidents Have Decorated the White House
Bianca Rodriguez Bianca Rodriguez is the digital fellow at Marie Claire, where she covers all your favorite podcasts, Netflix shows, and celebrities ranging from Rihanna to Harry Styles.
This content is created and maintained by a third party, and imported onto this page to help users provide their email addresses. You may be able to find more information about this and similar content at piano.io
Advertisement - Continue Reading Below
More From The 2020 Presidential Election
Kamala Harris Is "Momala" to Two Stepchildren
This Is How Much Joe Biden Is Worth
Advertisement - Continue Reading Below
This Is How Much Kamala Harris Is Worth
Joe Biden's Grandkids Are Among His Biggest Fans
Joe Biden's Son Beau and the Story of His Death
Kamala Once Clashed With Biden Over Abortion
Where Kamala Harris Stands on Gun Control
Unraveling the Latest Kamala Harris Controversy
Who Is Donald Harris, Kamala Harris's Father?
Kamala Harris Is Married to Her Number One Fan