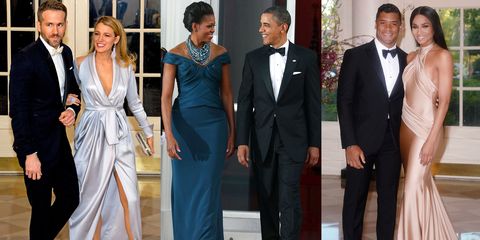 There are a lot of reasons we'll miss the Obamas in the White House. We've watched Malia and Sasha grow up before our very eyes, and our lady crush on Michelle is stronger than ever. But really, it's because the State Dinners thrown by the Obamas were the *best* parties we were never invited to. In honor of Obama's final State Dinner, let's look back at all 13 thrown by Barry and Michelle. It's okay. We're teary-eyed too.

Talk about going out with a bang. Michelle looked *flawless* in a rose gold Atelier Versace gown. The dress plus the flirty laughter between Michelle and Barack reminded us why we'll miss them so much: they are the ultimate #goals.

Chance the Rapper and Kenneth Bennett.

Back in August, the Obamas hosted a State Dinner honoring Singapore's Prime Minister Lee Hsien Loong and and his wife Ho Ching.

The First Lady wore a stunning white strapless dress by Brandon Maxwell that was *so* good it got the POTUS 👍 of approval.

The biggest State Dinner...ever? The Obamas welcomed leaders from Denmark, Norway, Finland, Sweden, and Iceland for the Nordic State Dinner.

Michelle chose a beautiful blush gown by Naeem Khan, which she accessorized with coordinating FLOTUS and POTUS smiles ✔️✔️.

Aziz Ansari and his mother, Fatima.

Will Ferrell  and Viveca Paulin.

The Obamas threw a State Dinner in May to honor the Prime Minister of Canada Justin Trudeau and his wife, Sophie Grégoire Trudeau.

Michelle wore a printed strapless gown by Jason Wu that showed off her *killer* arms.

Sasha! The youngest Obama also made her first State Dinner appearance in March.

Next
The Women of the Syrian Refugee Crisis 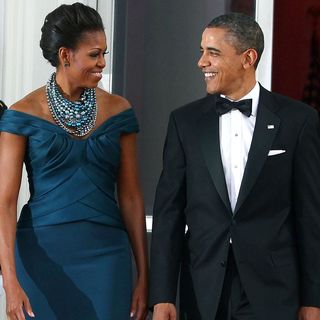 Advertisement - Continue Reading Below
Maggie Maloney Associate Digital Editor Maggie Maloney is the associate editor at Town & Country and ELLE Decor, where she covers style, beauty, jewelry, and the many members of the royal family.
This content is created and maintained by a third party, and imported onto this page to help users provide their email addresses. You may be able to find more information about this and similar content at piano.io
More From Politics
What Liberation Means This Juneteenth
Kathryn Garcia: It's Time to Step Up or Shut Up
Advertisement - Continue Reading Below
A Valedictorian Speaks Out Against Abortion Bans
Standing Between Care and Violence
Seeking Healing a Century After the Tulsa Massacre
What to Know about Texas's Abortion "Trigger Ban"
A New Book Invites Us to Rethink Menstrual Equity
We Must Remember George Floyd's Legacy
This Is How Much Joe Biden Is Worth
Joe Biden's Granddaughter Is His Biggest Fan