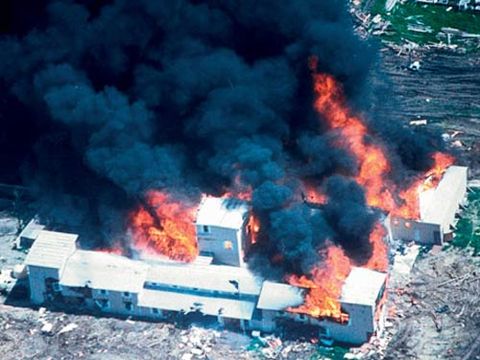 MC: So how long have you lived at this notorious site?

Not that long — three or four years. I didn't grow up here.

MC: Do you find it weird when tourists come to the property to look around?

At first I did, yes. Now I think the Holy Spirit brings them here. They want to see what happened, to find out if it was true, what they saw on television.

MC: When did the whole thing become more real for you?

My little brothers took out their metal detectors and found gobs and gobs of bullets on the property. It started me thinking: This isn't just some place; this is a historical site. And even though I wasn't here when the agents came in, I am still kind of part of it.

MC: What do you know about David Koresh?

I know that he was the sinning messiah. He took multiple wives and slept with young girls, and we don't approve of that. I don't think he was right, but I don't think the government was, either. Children died here.

MC: What is it like to live near Waco and be a Branch Davidian?

I'm pretty careful about what I tell people when I first meet them. My friends aren't Branch Davidians. They're normal kids — people I've met at school or work. I don't tell them right away where I live. I let them get to know me first. It's just better that way.

MC: Now the government wants to build a highway through your land — do you think they're picking a fight?

They've been so quiet about it. We heard from neighbors; otherwise we might never have known. It's hard to believe it's all a coincidence. They want to pave over this place, make it go away so what happened will be forgotten.