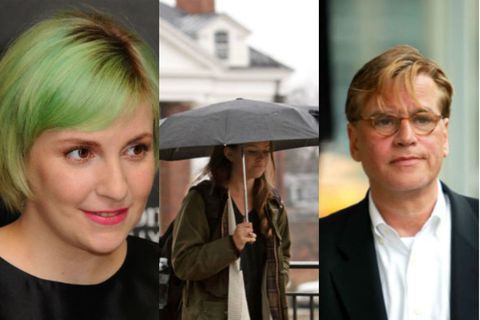 In some ways it's felt like we've had a whole year's worth of wins, but in others...not so much. Between sexual assault on college campuses and the attack accusations against Bill Cosby, there's been a whole slew of stomach-churning rape news in 2014—but a lot has happened this week alone. (FYI: We're only two days in.) Here's a rundown:

1. There's an Oberlin alumnus who, just like the rapist Lena Dunham wrote about in Not That Kind of Girl, wore purple cowboy boots and had the name Barry. His lawyers hinted that they were going to sue Random House, so the publisher is now altering future versions of Dunham's memoir to make sure non-rapist Barry's reputation isn't damaged. Update, 12/10: Dunham has written a response, in which she apologizes to the wrongly accused Barry and further explains her intentions for sharing her story. "Speaking out was never about exposing the man who assaulted me. Rather, it was about exposing my shame, letting it dry out in the sun. I did not wish to be contacted by him or to open a criminal investigation," she said. "I am in a loving and peaceful place in my life and I am not willing to sacrifice any more of it for this person I do not know, aside from one night I will never forget."

2. After Rolling Stone retracted its feature article on UVA rape survivor Jackie amidst claims that it hadn't properly corroborated the details, someone is coming forward to back her up. Emily Clark, Jackie's freshman-year suitemate, wrote a letter to defend her friend: "Whether the details are correct or not, and whether the reporting was faulty, or the hazy memories of a traumatizing night got skewed…the blame should never fall on the victim's shoulders. Jackie is a victim, as are so many others, men and women, young and old. So many stories have gone untold and so many perpetrators have been allowed to walk free."

3. A Newsroom writer says showrunner Aaron Sorkin lashed out at her for suggesting that Sunday's much-beleaguered plotline casting a college rape survivor in an unflattering light be cut. In response to New Yorker TV critic Emily Nussbaum's heated review of the episode, writer Alena Smith tweeted that Sorkin didn't respond well to her questioning: In other words, he kicked her out. If you watched the episode, you'll know the plot, which featured a male character on the show claiming that—although the rape survivor seems genuinely shaken and completely authentic—he's "morally obligated" to believe her attacker is innocent. Because ...why? We're not really sure. Maybe Nussbaum put it best: "WTF LOL OMFG."


The Fight Against Sexual Violence on College Campuses: Only With Consent


The Fight Against Sexual Violence on College Campuses: End Rape on Campus


The Fight Against Sexual Violence on College Campuses: One Student

Chelsea Peng I'm Chelsea Peng, the assistant editor at MarieClaire.com.
This content is created and maintained by a third party, and imported onto this page to help users provide their email addresses. You may be able to find more information about this and similar content at piano.io
Advertisement - Continue Reading Below
More From Politics
Anita Hill Believes We Can End Gender Violence
For Teachers, Going to Work Can Mean Life or Death
Advertisement - Continue Reading Below
Want to Help Moms? Prioritize Menstrual Equity
Abortion Rights Start at the State Level
All of Your Abortion Questions Answered
The Texas Abortion Snitch Site Is Having a Bad Day
The Future of Afghan Women Depends on Us
How You Can Help People in Afghanistan
Andrew Cuomo Has Resigned as NY Governor
Gwen Berry: Athlete, Activist, Olympian