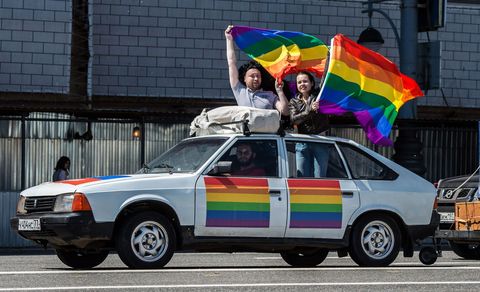 Transgender Russians will no longer be able to get drivers' licenses, according to a new law that went into effect this week, the BBC reports.

Russia updated its list of medical reasons a person shouldn't drive, which mostly includes obvious hindrances like blindness and epilepsy. But it also adds "personality and behavior disorders" as referenced by the World Health Organization, i.e. fetishism, compulsive gambling, and being transgender.

We'll just let that sink in for a second.

"Banning people from driving based on their gender identity or expression is ridiculous," Shawn Gaylord of Human Rights First said in a statement, "and just another example of the Russian regime's methodical rollback of basic human rights for its citizens." Gaylord also argued that the new policy will make transgender people more hesitant to seek treatment.

It's just the latest crackdown on LGBT rights in Russia; the country banned "promoting non-traditional lifestyles" in 2013.

Victory for Reproductive Rights in Ireland