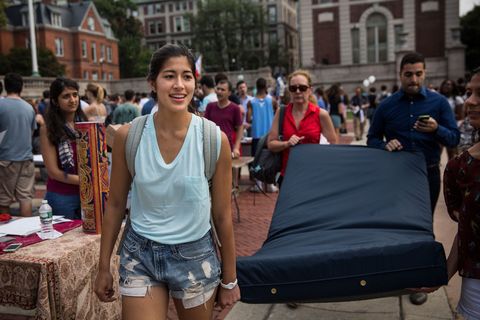 In September, Columbia senior Emma Sulkowicz began carrying her mattress around campus to protest the school's handling of her rape case. Tonight, she'll attend the President's State of the Union address—though likely without said bedding in tow.

The 22-year-old visual-arts major will join Senator Kirsten Gillibrand, who is urging Obama to pass bipartisan legislation requiring colleges to strengthen their sexual-assault policies. "I hope the president will seize this opportunity to shine a national spotlight on the need to flip the incentives that currently reward colleges for sweeping sexual assaults under the rug," Gillibrand told the New York Daily News.

The State of the Union airs at 9 p.m. EST on all the major networks, and we'll be live tweeting the whole thing.

In the meantime, watch Sulkowicz discuss her protest below.

White House to Colleges: Here's How You Can Curb Rape on Campus