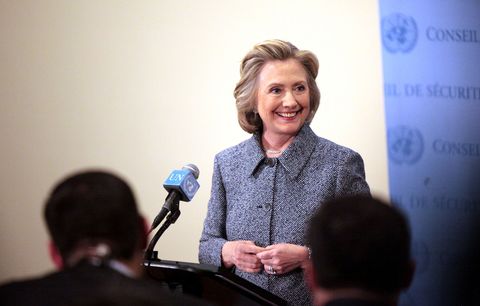 At yesterday's U.N. Conference on Women, Hillary Clinton gave a speech in which she explained why "there's never been a better time in history to be born female." It was uplifting, which—in a time when all the news about women's issues seems to be bad—is a nice change.

"A girl born in Lesotho 20 years ago could not hope to one day own property or sign a contract," she said. "Today, she can. If she were born in Nepal or Afghanistan, there was a tragically high chance her mother would die in childbirth. Today, that is far less likely. A girl born 20 years ago in Rwanda grew up in the shadow of genocide and rape. Today, she can be proud women have led the way out of that dark time, and now there are more women serving in her country's parliament than anywhere else in the world. Today, thanks to the efforts of so many, women and girls have a greater chance to live healthy and secure lives."

*wipes eyes*And while Clinton said we've still got a long way to go to reach gender equality—which can only come about with the support of political and economic leaders and, of course, all people—she has noticed a shift.

"When I was Secretary of State and I would speak with my colleagues across the world about these issues, there was a moment when I often saw their eyes glaze over. And I could almost read their minds: 'Yes, I know she's going to talk to me about women, and I just have to put a smile on my face, and we'll get through this and get to the important issues.' That began to change."

Interestingly the speech wasn't aired on TV (because the networks were too busy talking about the whole personal email kerfuffle), but we've got you:

Chelsea Peng I'm Chelsea Peng, the assistant editor at MarieClaire.com.
This content is created and maintained by a third party, and imported onto this page to help users provide their email addresses. You may be able to find more information about this and similar content at piano.io
Advertisement - Continue Reading Below
More From Politics
What Liberation Means This Juneteenth
Kathryn Garcia: It's Time to Step Up or Shut Up
Advertisement - Continue Reading Below
A Valedictorian Speaks Out Against Abortion Bans
Standing Between Care and Violence
Seeking Healing a Century After the Tulsa Massacre
What to Know about Texas's Abortion "Trigger Ban"
A New Book Invites Us to Rethink Menstrual Equity
We Must Remember George Floyd's Legacy
This Is How Much Joe Biden Is Worth
Joe Biden's Granddaughter Is His Biggest Fan