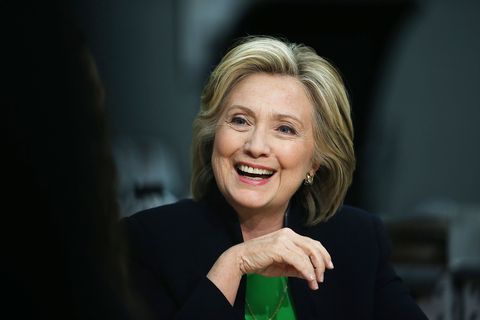 Grillary/Chillary Clinton has just restocked her online store with summer merchandise, and it is like a millennial candy store or Urban Outfitters—same thing. That is a koozie above. For beer. That says "amirite." There are also flash tattoos and a spatula that not only brands your meat with her logo but also functions as a bottle opener.

Pssshhh. And they say she's out of touch with the people.

Original post, 5/26: Ever since Hillary Clinton announced her candidacy, every old dude with a political science degree and a standing appointment on cable television has been like, "Yes, yes. According to my calculations, she now has to downplay her accomplishments and ambition so she can win this popularity contest." So, by golly, she went and recruited Beyoncé. She got a chicken burrito bowl at Chipotle. She made Brooklyn her campaign HQ. And on Tuesday, she opened her online store and waltzed straight into America's heart.*

Amongst the 25 items for sale, the clear standout is the "Everyday Pantsuit Tee," which references her well-known penchant for matching sets in every shade of the rainbow.

*exaggeration, but as everyone knows, self-deprecation and puns are definitely how she'd get there

Chelsea Peng I'm Chelsea Peng, the assistant editor at MarieClaire.com.
This content is created and maintained by a third party, and imported onto this page to help users provide their email addresses. You may be able to find more information about this and similar content at piano.io
Advertisement - Continue Reading Below
More From Politics
What Liberation Means This Juneteenth
Kathryn Garcia: It's Time to Step Up or Shut Up
Advertisement - Continue Reading Below
A Valedictorian Speaks Out Against Abortion Bans
Standing Between Care and Violence
Seeking Healing a Century After the Tulsa Massacre
What to Know about Texas's Abortion "Trigger Ban"
A New Book Invites Us to Rethink Menstrual Equity
We Must Remember George Floyd's Legacy
This Is How Much Joe Biden Is Worth
Joe Biden's Granddaughter Is His Biggest Fan