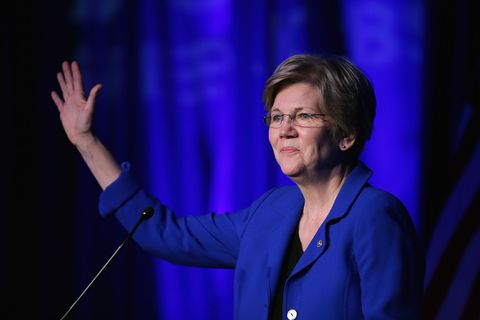 Sen. Elizabeth Warren pulled no punches on the Senate floor Monday when she harangued Republican lawmakers for calling a vote to defund Planned Parenthood.

"Did you fall down, hit your head and think you woke up in the 1950s, or the 1890s?" said Warren, a Democrat from Massachusetts. "Should we call for a doctor? Because I simply cannot believe that in the year 2015, the United States Senate would be spending its time trying to defund women's health care centers."

Republican senators needed 60 votes to proceed to the Senator floor with a debate of a bill to defund Planned Parenthood, but they ultimately garnered 53 in support. That means Planned Parenthood is safe, for now.

Warren addressed the video and the GOP response directly in her speech Monday.

This content is imported from YouTube. You may be able to find the same content in another format, or you may be able to find more information, at their web site.
Michael Sebastian Michael Sebastian was named editor-in-chief of Esquire in June 2019 where he oversees print and digital content, strategy and operations.
This content is created and maintained by a third party, and imported onto this page to help users provide their email addresses. You may be able to find more information about this and similar content at piano.io
Advertisement - Continue Reading Below
More From Politics
How to Help Black Lives Matter If You Can't Donate
Does Your State Have a Tampon Tax?
Advertisement - Continue Reading Below
What's Ranked-Choice Voting? Allow Us to Explain
Paid Leave for All Isn't Just a 'Women's Issue'
Yes, Caregiving Is Essential Infrastructure
Unforgettable Signs From the Protests
23 Ways Women Still Aren't Equal to Men
Ma’Khia Bryant: What We Know
Greta Thunberg Expertly Trolled Boris Johnson
The Hope and Heartbreak of Derek Chauvin's Verdict