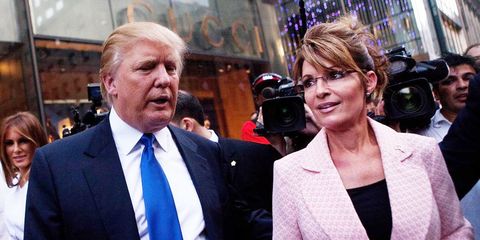 Update, 8/29: While they've shared mutual admiration for each other before, Donald Trump and Sarah Palin have finally cemented their status as BFFs. And all it took was a 10-minute interview.

Chatting for Palin's One America News Network show, On Point, the Republicans discussed Trump's run for president and bonded over a range of topics—including veterans, the economy and "idiots in the press." Oh, and of course, the Bible.

Impressed by Palin's "respect for a truth-talker" like Trump, the mogul couldn't help but reciprocate praise.

"You are a terrific person," he gushed to the former vice-presidential candidate. Watch the interview below:

Original story, 8/ 28: It's been about 24 hours since Donald Trump asked a lady to touch his hair on stage, so he's long overdue for another viral moment. Luckily, kindred spirit Sarah Palin is here to help: She'll be interviewing him and other GOP candidates on her cable TV show Friday night.

Sarah Palin announced the news in a Facebook post, which called out the "lamestream media" for bombarding Trump with a question about his favorite Bible verse. "I'll cover this in my interview with Donald Trump and other candidates tonight on the One America News Network show On Point," she said.

A representative for the network confirmed the news, saying she'll also be interviewing Ted Cruz and Jeb Bush, plus a few more candidates.

Palin is guest hosting the show this week, and her final show of the week will air tonight at 10 p.m. EST. One America News Network is a small cable news network that only covers about 12 million households across the country, but it's likely to have its best ratings yet tonight.

Palin and Trump have been political pals for a while now. Back in 2011, Palin joined him for pizza in a very publicized New York City trip. He once said it's a possibility she'd end up on his cabinet, and she said she'd "leave the door open" to the possibility of being his VP. (Do you hear that Saturday Night Live writers? Are you salivating yet?)