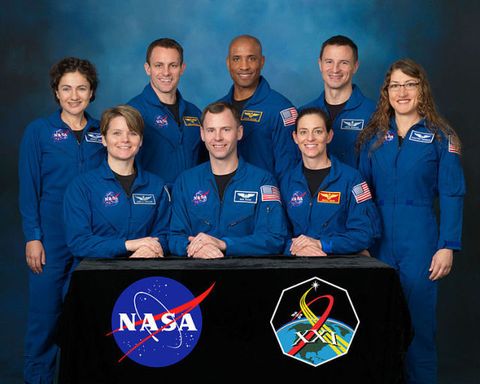 For the first time ever, the latest class of NASA astronauts is half female. And the coolest part about it? They could be on the first team to go to Mars in 15 years.

NASA only inducts new classes every four or five years and Nicole Aunapu Mann, 38, Anne McClain, 36, Jessica Meir, 38, and Christina Hammock Koch, 37, were chosen for the 2013 class from a pool of more than 6,000 candidates after a testing process that lasted about a year and a half, according to Glamour.

Would you go to Mars? Meet the four women astronauts who can't wait to go: https://t.co/NvlyzmyUfr Via @glamourmag pic.twitter.com/BRjoyZX1C3

The women in the new group, who have all flown combat missions in the military, talked to the outlet about the possibility of the historic mission ahead of them.

If they're chosen for the Mars trip, they'll travel 35 million miles. Just getting to the planet will take up to nine months, so they'll be gone for two or three years.

"If I get tapped for the mission, I'll talk to my son about what I'll be doing," said Mann, who is one of the two moms in the group. "He's almost four now but will be a teen or in his twenties by then. His life will change while I'm gone. And that's a big sacrifice."

Kate Storey Esquire Writer-at-Large Kate Storey is a Writer-at-Large for Esquire covering culture, politics, and style.
This content is created and maintained by a third party, and imported onto this page to help users provide their email addresses. You may be able to find more information about this and similar content at piano.io
Advertisement - Continue Reading Below
More From Politics
What Is Mutual Aid? For One, Not a Trend
How to Help Texans During the Winter Storm Crisis
Advertisement - Continue Reading Below
Hate Crimes Against Asian Americans Are Rising
Anti-Trans Bills Are in the Works Across the U.S.
Vanishing Act
The Women Who Took on ISIS—and Won
Yes, Trans People Belong in Sports
I’m a Parkland Survivor. Rep Greene Must Resign
Why Indian Farmers Have Been Protesting for Months
AOC Opens Up About Her Trauma