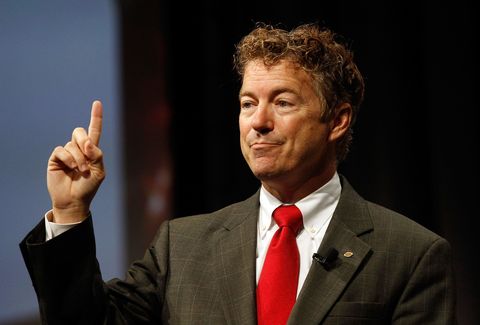 Due to Rand Paul being epically confused about feminism and potentially stuck in 1998, he felt the need to bring up Bill Clinton's affair with Monica Lewinsky during Thursday's Republican debate. Hey, someone had to make up for Trump not being there, right?

Rand started out strong, saying Hillary is not responsible for Bill's behavior, before turning it around and pretty much saying that she is. "I don't blame Hillary Clinton at all for this. I don't think she's responsible for his behavior," Paul mused, turning our 👀 into a 👍. But then he kept talking. "But I do think her position as promoting women's rights and fairness to women in the workplace, that if what Bill Clinton did, any CEO in our country did, with an intern, they would be fired...The thing is, [Hillary] can't be a champion of women's rights at the same time she's got this that is always lurking out there, this type of behavior. So it is difficult."

Uh, not really, but okay. To be fair to Rand and his curly locks of love, it's actually Trump who's responsible for rehashing Bill's past:

Rand was simply throwing his two cents into the sexist mix, seemingly convinced that women should be held accountable for their husbands' sexual misconduct decades later. It's sweet that the presidential hopeful abides by the "once a cheater, always a cheater" school of thought, but what does that have to do with Hilary's presidential run, or her championship of women? Yep, nothing.