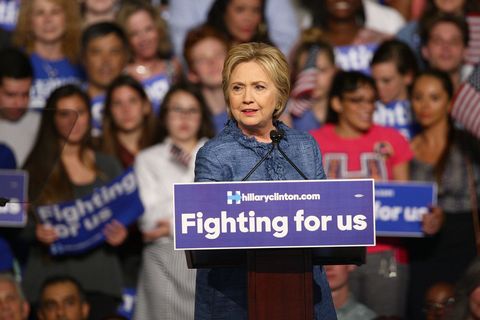 Democratic presidential candidate Hillary Clinton had a huge night last night, winning primaries in Ohio, Florida, North Carolina, and Illinois. So she gave a fiery victory speech, despite a voice that had become hoarse from constant chatting on the campaign trail.

That speech did not go over well with some dudes in the media, because she appeared, you know, fired up, and wasn't all smiles. Joe Scarborough, co-host of MSNBC's Morning Joe, sort-of congratulated Clinton for her massive primary win, by telling her how to contort her face in response to it.

The Internet did not take kindly to this kind of condescension.

During that same speech, Fox News host Howard Kurtz decided to attack Clinton's "shouting" tone. That also didn't go over well, but he used the same explanation as Scarborough, that he's said the same thing about Sanders.

Fox analyst Brit Hume had a similar thought during her speech.

And so did Politico correspondent Glenn Thrush:

Look, at the end of the day, it's not about these journalists' tweets—it's about the double standard that women face every day. Women everywhere have been told to smile by random men, who are displeased by seeing a woman not looking glowing and happy all the time. When men speak loudly in a meeting, it's passionate, but when women do, it's shrill and they should really just "calm down." Plus, people call Sanders "grumpy" in an endearing way, but people do not say the same thing about Clinton.

Clinton herself has even addressed this level of critique when talking about gun control last year. "I've been told to stop, and I quote, 'shouting about gun violence,'" she said. "First of all, I'm not shouting. It's just when women talk, some people think we're shouting."