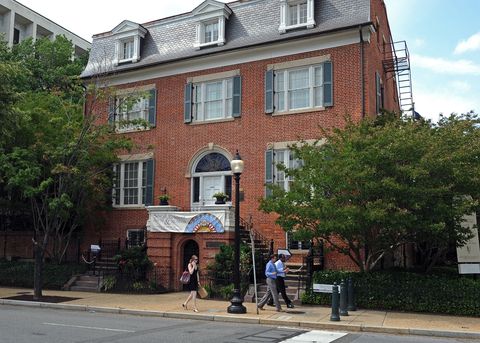 If you have studied American history and/or seen Iron-Jawed Angels, the suffragette movie in which Hilary Swank and Patrick Dempsey squash any rom-com sentiments you may have had, you will know who Alice Paul was. Short answer: a badass who now has her own national monument.

The Obama administration will designate the Sewall-Belmont House & Museum in Washington, D.C. as the Belmont-Paul Women's Equality National Monument (sucks for Sewall) today, AKA Equal Pay Day. From 1929 to 1997, the historic location served as the headquarters for the National Woman's Party, after which it became a museum.

There are a lot of Debbie Downers being like "THIS IS NOT ENOUGH" (which is fair), but just listen to what Paige Harrington, the house's executive director, had to say in an interview with National Geographic: "There are women today that are in their 60s and 70s who come to this house and they say, 'When I was a coed, and I was in D.C...I walked up those stairs, rang that bell, and Alice Paul answered the door.' And to them, it is a pivotal moment in their lives."

Chelsea Peng I'm Chelsea Peng, the assistant editor at MarieClaire.com.
This content is created and maintained by a third party, and imported onto this page to help users provide their email addresses. You may be able to find more information about this and similar content at piano.io
Advertisement - Continue Reading Below
More From Politics
41 Surprising Rules First Ladies Have to Follow
Asian American Women on Where to Go From Here
Advertisement - Continue Reading Below
Syrian Journalists Reflect on a Decade of War
How to Show Your Support for the AAPI Community
Activist Lydia X. Z. Brown on Disability Justice
Elisa Crespo: "I'm Not Here to Make History"
What We Know About the Georgia Spa Shootings
Dianne Morales Has Never Listened to the Naysayers
Stacey Abrams on Her Definition of Success
Grand New Party?