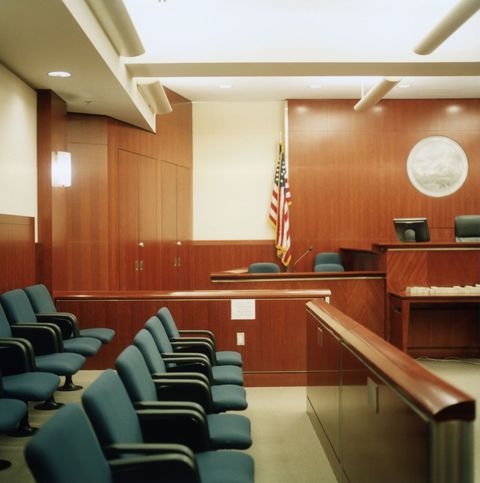 Today in WTF: An Oklahoma court has ruled that, according to current state law, forced oral sex does not constitute rape if the victim is unconscious from intoxication.

The unanimous decision by Oklahoma's criminal appeals court came after a 17-year-old boy was charged with forced oral sodomy after he received oral sex from a 16-year-old girl who was unconscious from drinking at the time. (If you, like us, are having a hard time wrapping your head around what that means/what could have happened, basically: He forced his penis inside an unconscious girl's mouth while she was passed out drunk.) According to The Guardian, the boy drove the girl home, having to carry her to his car, after a night of drinking with a group of friends in a park in Tulsa, Oklahoma.

The boy told investigators the girl had consented to oral sex, while she claimed to have no memory of the evening after leaving the park.

Upon arrival to her grandmother's house, the girl was still unconscious and taken to the hospital where here blood alcohol content was upwards of .34. A sexual assault examination was performed, confirming the boy's DNA was present on the back of her leg and in her mouth. The boy told investigators the girl had consented to oral sex, while she claimed to have no memory of the evening after leaving the park.

"Forcible sodomy cannot occur where a victim is so intoxicated as to be completely unconscious at the time of the sexual act of oral copulation," the court's decision read. "We will not, in order to justify prosecution of a person for an offense, enlarge a statute beyond the fair meaning of its language."

Sounds like victim-blaming and an egregiously archaic view on sexual assault and rape, no? Yeah, you're not alone: The ruling has caused outrage among many, including Tulsa County district attorney Benjamin Fu, who said in response to the decision:

"The plain meaning of forcible oral sodomy, of using force, includes taking advantage of a victim who was too intoxicated to consent. I don't believe that anybody, until that day, believed that the state of the law was that this kind of conduct was ambiguous, much less legal. And I don't think the law was a loophole until the court decided it was. To focus on why the victim was unable to consent puts the victim at fault."

Hopefully this will serve as a call to change outdated laws that allow for and legitimize unconscionable sexual abuse.

Sarah Lindig Senior Digital Editor, Special Projects Sarah Lindig is the senior digital editor, overseeing special projects for Harper's Bazaar.
This content is created and maintained by a third party, and imported onto this page to help users provide their email addresses. You may be able to find more information about this and similar content at piano.io
Advertisement - Continue Reading Below
More From Politics
Moving Forward: To Heal America We Need the ERA
Important 2021 Elections to Keep on Your Radar
Advertisement - Continue Reading Below
Lisa Murkowski Hints She'll Vote to Convict Trump
AOC Calls Out the Hypocrisy of "Blue Lives Matter"
All Your Qs About Biden's Inauguration, Answered
President Donald Trump Was Just Impeached, Again
Teleabortion: A Bitter Pill
Cori Bush Decries GOP Refusing Safety Protocols
AOC Thought She Was Going to Die Inside Capitol
Attorney General Letitia James Takes on the World