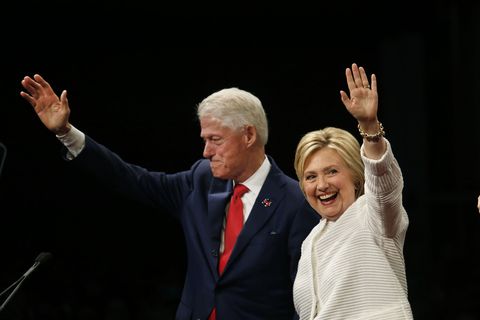 When the Democratic National Convention formally nominated Hillary Clinton for president on Tuesday, it was a monumental and historic moment for humans across the country. As Hillary said herself, "we just put the biggest crack in that glass ceiling yet."

But, by Wednesday morning, countless newspapers and media outlets decided to cover the historic nomination with a picture of Bill on the front page. Interesting choice, indeed. Sure, he spoke on Tuesday and gave a moving speech on the epic Hill-Bill love story, but, uh, guys? This wasn't his moment—it was Hillary's. (Thankfully Twitter users were ready to set the record straight.)

The Wall Street Journal made the mistake in the first edition of Wednesday's print issue, featuring an image of Bill:

Hey @WSJ, you put the wrong Clinton on your cover. pic.twitter.com/ywwgKNwLhG

And although a later edition of Wednesday's paper did feature Hillary:

At that point, the WSJ website still did not show the actual nominee. Still bad.

Front page of WSJ online edition as I see it: no Hillary to be seen. h/t @annehelen pic.twitter.com/eNtjeovSDT

The Chicago Tribune made the same mistake, with a picture of Bill on the front page and a headline so unclear it literally could have been from the 1992 DNC where Bill was nominated. Seriously, it doesn't even specify which Clinton won.

The Washington Post at least mentioned Hillary, but still only included a photo of Bill.

I see the @WashingtonPost also got the wrong Clinton on the front page. #DoBetter pic.twitter.com/RgeOlzZeoJ

Local newspapers made the same mistake. The Buffalo News used a Bill photo on their front page:

What's worse, using Bill, not Hillary, as the A-1 photo, or having Russ Brandon's mug anywhere on the front page? pic.twitter.com/nwolceO5EY

The Arkansas Democrat-Gazette also only showed Bill. It's his home state, yes, but still?

And finally, this zoomed in image of The Alaska Dispatch News front page shows an image from the crowd of just Bill.

Of course Hillary is largely supported by her husband, and the former president/potential First Gentleman combo is historic for Bill as well. But, the decision to cover the wrong Clinton is just that—wrong. As usual, the Twittersphere said it best:

YOU HAD ONE JOB. 🙄 https://t.co/gAHuaPAPvo

Maggie Maloney Associate Digital Editor Maggie Maloney is the associate editor at Town & Country and ELLE Decor, where she covers style, beauty, jewelry, and the many members of the royal family.
Advertisement - Continue Reading Below
More From Politics
Everything We Know About Senator Warren's Husband
Mayor Pete's Husband Would Be a "First Gentleman"
Advertisement - Continue Reading Below
How a Parkland Mom Turned Her Grief into Action
He Voted for Trump. She Voted for Bernie.
How Guerrilla Feminists Are Fighting Femicide
Who Was Mayor Pete's Father, Joseph Buttigieg?
Nancy Pelosi, Icon, Ripped Up Trump's SOTU Address
Thoughts From a First-Time Caucus-Goer
And Now, a Word From the Future Voters of Iowa
Ayanna Pressley Wants Total Justice for Survivors