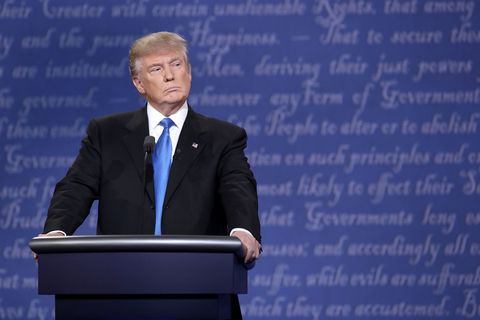 In a huge statistical upset, Republican presidential candidate Donald Trump has won the 2016 election, and will assume office as President of the United States in January 2017.

Most polls and speculative guesses leading up to Election Day put Hillary Clinton—our first-ever female presidential candidate—well above her conservative opponent. But after the voting booths closed on Tuesday night, the map of our country proved far more red than blue.

For such an unconventional candidate, there will surely be repercussions, through the Republican party and the country at large. Trump's campaign has brought drastic issues to light, from sexual assault against women to anti-immigration sentiments, and we'll be grappling with them together in the coming months and years.

Jessica Pels Editor-in-Chief As the editor of Cosmopolitan, Jess oversees the editorial for all of Cosmo's efforts across print, digital, video, and emerging platforms.
This content is created and maintained by a third party, and imported onto this page to help users provide their email addresses. You may be able to find more information about this and similar content at piano.io
Advertisement - Continue Reading Below
More From Politics
What Is Mutual Aid? For One, Not a Trend
How to Help Texans During the Winter Storm Crisis
Advertisement - Continue Reading Below
Hate Crimes Against Asian Americans Are Rising
Anti-Trans Bills Are in the Works Across the U.S.
Vanishing Act
The Women Who Took on ISIS—and Won
Yes, Trans People Belong in Sports
I’m a Parkland Survivor. Rep Greene Must Resign
Why Indian Farmers Have Been Protesting for Months
AOC Opens Up About Her Trauma