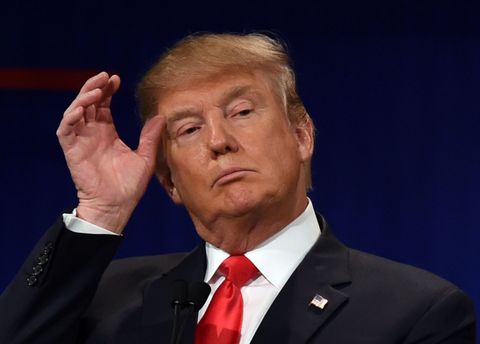 When Donald Trump is inaugurated on January 20, the Senate will begin voting to approve or reject his Cabinet appointments. (For a full breakdown of who they are and why they're so polarizing, see our review here.) And while it's standard operating procedure for an incoming president to get most of his appointment wishes granted, very little about the Trump transition has followed standard operating procedure. So what happens now?

It's likely that Senate Democrats will do their best to block some of the most heavily-criticized nominees, but how does that work? And if the Democrats are successful, what happens next? Here's what you need to know.

When does the Senate vote on this stuff?

None of Trump's nominees can be confirmed until he officially takes office on January 20. But in order to minimize the time between a new president's inauguration and the official appointment of his or her Cabinet, the Senate can (and usually does) begin hearings sooner to expedite the process. Hearings about Trump's nominees will likely begin soon after Congress is sworn in on January 3.

All Cabinet-level officials (with the notable exception of the White House Chief of Staff) have to be approved by the Senate, along with more than a thousand other agency heads and senior posts. The positions that don't require Senate approval are typically advisory roles, like the national security adviser, for example.

How does the Senate confirm Cabinet members?

The president-elect will have to start with official nominations once he's sworn in on January 20. Trump, like presidents before him, has publicly announced his nominations before Inauguration Day to give the Senate a heads up about whom he plans to appoint. These early announcements also give the Senate time to begin vetting early and speed up the confirmation process. Once he's sworn in, Trump will officially nominate his selections.

The next step is the Senate hearings. The nominations first go to the relevant committee (so the Judiciary Committee will vet the nominee for Attorney General, for example), where hearings will be held and the committee will decide how to proceed.

"All Cabinet-level officials (with the notable exception of the White House Chief of Staff) have to be approved by the Senate."

The committee can send the nominee to the floor for voting and can report the nomination favorably, unfavorably, or without recommendation. Or, alternatively, it can refuse to move on the nominee, which can stall or effectively kill the nomination. However, the full Senate would then have the option to invoke cloture and move things along.

Once the nomination moves to the full Senate floor for vote, a simple majority is required to confirm.

Can Senate Democrats do anything to block Trump's nominations?

Republicans currently enjoy a 52-48 majority in the Senate. A simple majority requires just 51 votes, meaning that the GOP does have the numbers to push through Trump's Cabinet nominees. However, that doesn't mean that Democrats can't make the process difficult.

Democrats can stall or "sit on" nominations and drag out the confirmation process considerably. We already saw Republicans do this to hold up (and effectively kill) Barack Obama's nomination of Merrick Garland for the Supreme Court. Any individual senator can place a hold on a candidate by asking his or her party leader to delay the vote. This rule was originally intended to give senators a means to delay votes due to things like scheduling conflicts. But now, the informal rule has evolved into one of the minority party's most effective means of blocking a nominee. It's up to the party leader to decide if to honor a hold and for how long.

"In a nutshell, although Senate Democrats can't totally block Trump's Cabinet appointments, they can force hours of debate for each and every one, dragging the confirmation process out for weeks."

Although Democrats pushed through new "nuclear" rules in 2013 that limit procedural filibusters for executive nominations, they can still force up to 30 hours of debate for each of Trump's nominations—which could drag the process out for weeks, given the limited hours the Senate has to work with.

In a nutshell, although Senate Democrats can't totally block Trump's Cabinet appointments, they can force hours of debate for each and every one, dragging the confirmation process out for weeks.

Does this mean all of Trump's nominations are definitely going to be confirmed?

No, definitely not. Even though Republicans have the numbers to theoretically push through all of Trump's nominees, that doesn't mean that they will. Some of the more controversial appointments may be opposed by even some Republicans. It's also possible that, during the course of interviews and hearings for the confirmation process, some nominees may drop out or withdraw.

The last Cabinet nominee to be formally rejected by the Senate was John G. Tower, who was nominated as Secretary of Defense by George Bush in 1989. It's actually more common for nominees to drop out or be withdrawn from consideration. Most recently, in 2009, President Obama's Secretary of Health & Human Services nominee,Tom Daschle, withdrew about two months into the confirmation process.

What happens if the Senate doesn't approve some of Trump's nominees?

If the Senate doesn't approve some of Trump's nominees for Cabinet, he'll have to go back to the drawing board and nominate new candidates, which would draw the process out even further. This is rare, however, as the Senate has historically tended to approve most presidents' nominations. Very few Cabinet appointments have been rejected outright, the last being Tower in 1989. It's been more common, in recent years, for presidents to withdraw their nominations after extended hearings, but even that is relatively uncommon. It happened just once with President Obama (with Daschle, mentioned above), twice with George W. Bush, and three times with Bill Clinton.

"Very few Cabinet appointments have been rejected outright, the last being John G. Tower in 1989."

It's worth noting though, that some Democrats have expressed mixed feelings about delaying the approval of Trump's Cabinet and other appointments, pointing to the importance of filling these high-level positions. Sen. Joe Manchin of West Virginia, for example, told Politico, "My God, I think we should have an attorney general in place on January 20. I sure do believe that." (It's worth noting, however, that Manchin is up for reelection in 2018 in a state that went strongly for Trump in the presidential election.)

Given the importance of filling these offices, it's unlikely that Senate Democrats will push to delay all or even most of Trump's nominations, especially those that he's decided to fill with more mainstream Republican candidates. His more radical and controversial appointments, however, could earn pushback not just from Democrats, but from some traditional Republicans as well, which could leave the president-elect in the position of having to offer up replacement nominees.

Incoming minority leader Sen. Chuck Schumer, of New York, will play an important role in the confirmation process. And he's made his feelings about Trump's appointees very clear. "President-elect Trump promised that he was going to clean up the swamp, and a whole lot of his nominees have had their career in the swamp," Schumer told the New York Times.

Kayleigh Roberts Kayleigh Roberts is the weekend editor at Marie Claire, covering celebrity and entertainment news, from actual royals like Kate Middleton and Meghan Markle to Hollywood royalty, like Katie Holmes and Chrissy Teigen.
This content is created and maintained by a third party, and imported onto this page to help users provide their email addresses. You may be able to find more information about this and similar content at piano.io
Advertisement - Continue Reading Below
More From Politics
How to Demand Justice for Adam Toledo
Daunte Wright's Death Sparks Protest in Minnesota
Advertisement - Continue Reading Below
41 Surprising Rules First Ladies Have to Follow
Asian American Women on Where to Go From Here
Syrian Journalists Reflect on a Decade of War
How to Show Your Support for the AAPI Community
Activist Lydia X. Z. Brown on Disability Justice
Elisa Crespo: "I'm Not Here to Make History"
What We Know About the Georgia Spa Shootings
Dianne Morales Has Never Listened to the Naysayers