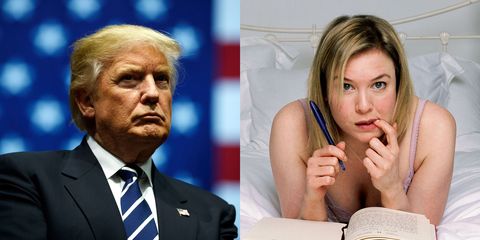 In the final dark days before the inauguration, we need humor more than ever to make us feel like this political satire is worthy of laughter more so than tears. Some of the best things in this category that the Internet has come up with is #TrumpBookReport and, of course, the Biden memes.

Now, London-based comedian Tiff Stevenson has set up a parody account that imagines what Bridget Jones' diary would sound like if it were written by a tangerine megalomaniac president-elect instead of our ever-relatable Bridget, and it's hysterical.

Will flirtatiously shrug it off

Must no longer be saddo loser & accept my victory with grace

Inauguration Day is purely commercial, cynical enterprise. Matter of supreme indifference to me!
That said am v cross at Charlotte Church

Vlad back in office today. I'll be poised, cool, ice queen and remember I'm a president elect & do not need him in order to be complete

"It's remarkable how little you have to change," Stevenson told Mashable, about how she composes the tweets. "There are so many parallels between Bridget and Donald. They are both utterly consumed with how other people see them and they are constantly chasing after the wrong guy. They share a love of words and exclamation marks too, such as vile!, tremendous!, media!, winning!, stupid!, weak!, smart!, loser!, love!"

One thing they don't have in common, of course, is that we're always rooting for Bridget, even when she has a massive f*ck up, because she's ultimately a caring person that's always striving for self-improvement.

"I think Trump could learn a lot from Bridget because she is likeable and when she makes a mistake she owns it rather than point the finger of blame at others."