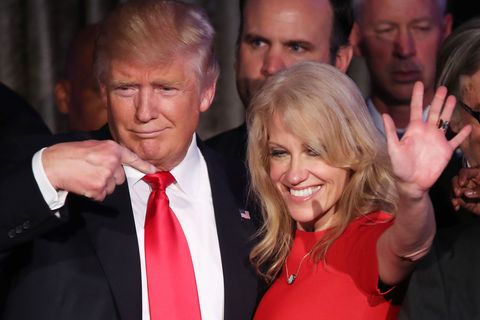 Controversial Trump advisor Kellyanne Conway just made headlines for promoting #AlternativeFacts (literally, what is life), and now she's back at it again with a stand-up comedy routine.

Footage of Conway competing in a 1998 "Funniest Celebrity in Washington D.C." charity contest is making the rounds, and it's best described as #AlternativeFunny—mostly thanks to a joke about child abuse and the Washington Redskins.

Mehera Bonner Contributor Mehera Bonner is a news writer who focuses on celebrities and royals—follow her on Instagram.
Advertisement - Continue Reading Below
More From Politics
And Now, a Word From the Future Voters of Iowa
Ayanna Pressley Wants Total Justice for Survivors
Advertisement - Continue Reading Below
Jot Down These 2020 Voter Registration Deadlines
What the ACLU Will Fight For in the Next 100 Years
Behind the Controversy at the Women's March
Women Are Not Granted Equality in the Constitution
Electability Is About Us—Not the Candidate
Everybody Running for President In 2020
Time’s Up for Wall Street
Women of Color Ruled Last Night's Debate