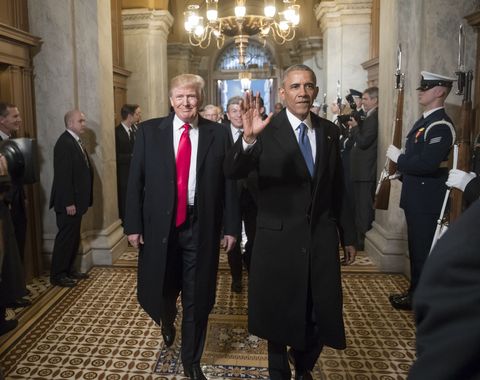 Donald Trump is president, and in between limiting access to abortion and supporting torture, he gave his first interview to ABC News—where he (somewhat surprisingly) gushed about Barack Obama.

Our former POTUS was photographed leaving a note on the desk of President Trump, who seemed eager to share the general good vibes of its contents.

"This was the letter given to me by President Obama. I won't show to you or read it to you, but a—just a, a beautiful letter," Trump said. "It was long, it was complex, it was thoughtful, and it took time to do it....I doubt too many of them were written in this manner.He really—in fact, I called him and thanked him for the thought that was put into that letter."

ABC News' David Muir pressed for more details, and Trump had this to say: "[Obama] said something that was very interesting to me, he said, 'You know if I thought your healthcare plan was going to be better than his plan, Obamacare, then I would support it,' and I believe he would."

He continued that the letter contained "Nothing that surprised me, but it was stated beautifully but that I'm representing a lot of people and I'm carrying on a very important tradition, and just do a great job. He wants me to do a great job."

Mehera Bonner Contributor Mehera Bonner is a news writer who focuses on celebrities and royals—follow her on Instagram.
This content is created and maintained by a third party, and imported onto this page to help users provide their email addresses. You may be able to find more information about this and similar content at piano.io
Advertisement - Continue Reading Below
More From Politics
Important 2021 Elections to Keep on Your Radar
Lisa Murkowski Hints She'll Vote to Convict Trump
Advertisement - Continue Reading Below
AOC Calls Out the Hypocrisy of "Blue Lives Matter"
All Your Qs About Biden's Inauguration, Answered
President Donald Trump Was Just Impeached, Again
Teleabortion: A Bitter Pill
Cori Bush Decries GOP Refusing Safety Protocols
AOC Thought She Was Going to Die Inside Capitol
Attorney General Letitia James Takes on the World
Can Trump Be Impeached After Biden's Inauguration?