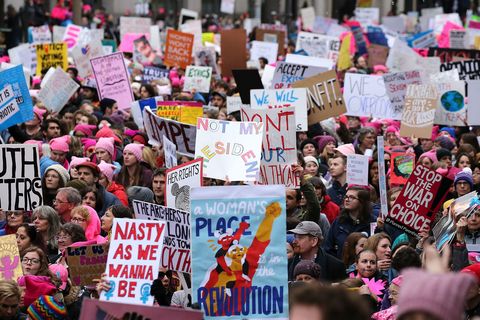 The organizers of the Women's March today unveiled their next major event—a "general strike" for women. Though the Instagram announcement is vague, the title "A Day Without A Woman" makes it clear that this is a unique kind of strike, representing not employees of a company or members of a union, but an entire gender.

"The will of the people will stand," reads the caption. And though information is thin on the ground, the groundswell of support that has already emerged speaks volumes—four hours after it was posted on Monday, the Instagram post already had close to 20,000 likes.

This is the latest of many strikes to arise in the wake of Donald Trump's inauguration, and his administration's botched rollout of its controversial immigration ban. On Inauguration Day, more than 7,000 women participated in a strike, organized by the feminist group National Women's Liberation. Another organization is calling for a national general strike on February 17, in defense of the constitution and in protest of Trump's policies.

"This is what I'm talking about. Hit 'em in the wallet," wrote comedian Corinne Fisher on Twitter, echoing the sentiment of the #GrabYourWallet boycott campaign which scored a major victory last week. After months of boycotts from consumers, Nordstrom dropped Ivanka Trump's clothing line from its stores, with Neiman Marcus swiftly following suit. Protest works.

Emma Dibdin Emma Dibdin is a freelance writer based in Los Angeles who writes about culture, mental health, and true crime.
This content is created and maintained by a third party, and imported onto this page to help users provide their email addresses. You may be able to find more information about this and similar content at piano.io
Advertisement - Continue Reading Below
More From Politics
It’s Time to End Equal Pay Days and Pass the ERA
In Conversation With Secretary Granholm
Advertisement - Continue Reading Below
Laphonza Butler on What's Next for EMILY's List
Anita Hill Believes We Can End Gender Violence
For Teachers, Going to Work Can Mean Life or Death
Want to Help Moms? Prioritize Menstrual Equity
Abortion Rights Start at the State Level
All of Your Abortion Questions Answered
The Texas Abortion Snitch Site Is Having a Bad Day
The Future of Afghan Women Depends on Us