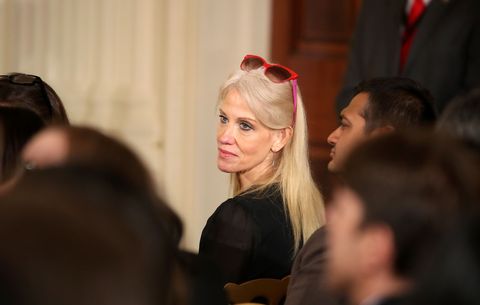 If you haven't seen much of Kellyanne Conway on cable news lately, there's a reason why. According to a report from CNNMoney, the counselor to President Trump has bee "sidelined" from going on television after she made one too many comments that didn't reflect White House policy.

Last week, Conway had said on television that Michael Flynn, then the national security adviser, had the "full confidence" of Trump—right before he ended up resigning. Prior to that, she publicly endorsed Ivanka Trump's clothing line, which violated federal ethics rules. Sources at the White House told CNN that Trump and his advisors decided she needed some time off the airwaves.

But Conway told CNN that couldn't be further from the truth. "I've been invited on shows every day, including two Sunday shows. I'm trying to focus on other pieces of my portfolio," she said, adding that she'll be on Fox News Wednesday night. And White House spokesperson Sarah Sanders echoed Conway's sentiments, calling the report "another wild goose chase."

Either way, Morning Joe won't be having her back, having officially banned her from the show last week for being "out of the loop" with the White House. But if you miss her, there's always this epic Saturday Night Live sketch. Jake Tapper, are you listening?