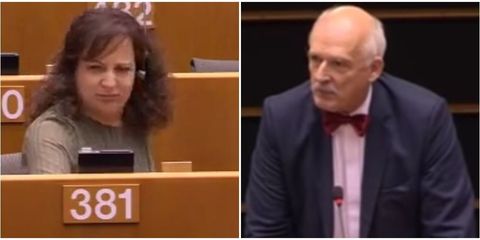 Warning: Watching this video may totally disorient you and trick you into believing we are living in ancient times.

In a debate Thursday about equal pay in the European Parliament, a Polish member of Parliament named Janusz Korwin-Mikke literally said: "Women must earn less because they are weaker, they are smaller, they are less intelligent. They must earn less. That is all."

His evidence for this argument was, logically, chess. "Do you know how many women are in the first hundred of chess players? I tell you: no one," he queried? Pretty sure Judit Polgár, a Hungarian grandmaster who defeated 11 male word champs and who is generally considered to be the best female chess player of all time, would have something to say about that.

First, let's look at her reaction when he made the chess comment:

A true hero. Watch as her face goes from polite listening to literal WTF.

After Korwin-Mikke finished his tired, she got up and quietly, calmly, and elegantly told him to essentially f*ck off:

"According to your opinion, I shouldn't have the right to be here as a member of parliament. And I know that it hurts you and bothers you that today women can sit in the House to represent citizens with the same rights as you. I am here to defend all European women from men like you."