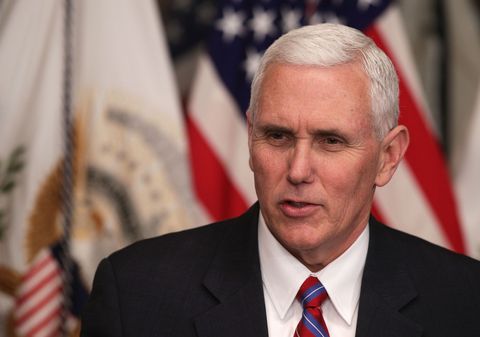 Remember how President Trump and Mike Pence were once obsessed with Hillary Clinton's private email server, leading "lock her up" chants across the country? Right. Same.

But this week news leaked that Mike Pence had also used a private email account for official business while he was governor of Indiana—that is, the same ethical crime for which Clinton was put through the wringer. Inevitably, the internet had some thoughts about this because the internet forgets nothing.

To complicate things further, Pence's office refused to release all the emails from his account, claiming that some were too "confidential and too sensitive to release to the public."

Now this tweet from October 2016 is—understandably—coming back to haunt him:

.@realDonaldTrump and I commend the FBI for reopening an investigation into Clinton's personal email server because no one is above the law.

Around the same time, Pence told CBS' Face the Nation "that literally Hillary Clinton had classified information on a private server that she said she didn't have…that, to me, is the kind of double standard that the American people are weary of."

And on that point, Pence was definitely correct.

When it comes to proving hypocrisy, has anything in history ever matched old tweets? https://t.co/DyMoAwJlVY

THIS IS JUST TOO GOOD 😊

Advertisement - Continue Reading Below
More From Politics
Get to Know CBS News Anchor Norah O'Donnell
Everything We Know About Senator Warren's Husband
Advertisement - Continue Reading Below
Mayor Pete's Husband Would Be a "First Gentleman"
How a Parkland Mom Turned Her Grief into Action
He Voted for Trump. She Voted for Bernie.
How Guerrilla Feminists Are Fighting Femicide
Who Was Mayor Pete's Father, Joseph Buttigieg?
Nancy Pelosi, Icon, Ripped Up Trump's SOTU Address
Thoughts From a First-Time Caucus-Goer
And Now, a Word From the Future Voters of Iowa