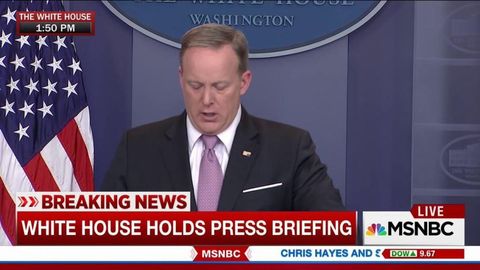 Is Sean Spicer okay? The White House press secretary sparked some concern during today's White House press conference, during which he wore his American flag pin upside down. It was almost certainly an accident—Spicer is no more a stranger to wardrobe malfunctions than his boss—but an upside-down flag is an officially recognized sign of distress.

According to Yahoo's White House correspondent Hunter Walker, Spicer was handed a note by Omarosa Manigault before he started taking questions. Then he quickly fixed his pin...though it took him a couple of tries.

Twitter was characteristically quick to respond, and one of the first responses came from the account for Netflix's political thriller House of Cards, which used the upside down flag in a recent season five promo.

Your loyalty has not gone unnoticed. https://t.co/ba1kz1yvXF

“There’s no promo” for @HouseofCards, jokes @PressSec after the flag pin error is pointed out. pic.twitter.com/UCPL7AeQc1

Spicer's USA flag pin is upside down. A silent scream for help? pic.twitter.com/A9UJdA1rzx

i fixed ur flag pin for u sean pic.twitter.com/Y9iCnYNKny

So...how long do we have to wait for Melissa McCarthy's next SNL stint as Spicer?

Emma Dibdin Contributor Emma Dibdin writes about television, movies, and podcasts, with coverage including opinion essays, news posts, episodic reviews and in-depth interviews with creatives.
Advertisement - Continue Reading Below
More From Politics
And Now, a Word From the Future Voters of Iowa
Ayanna Pressley Wants Total Justice for Survivors
Advertisement - Continue Reading Below
Jot Down These 2020 Voter Registration Deadlines
What the ACLU Will Fight For in the Next 100 Years
Behind the Controversy at the Women's March
Women Are Not Granted Equality in the Constitution
Electability Is About Us—Not the Candidate
Everybody Running for President In 2020
Time’s Up for Wall Street
Women of Color Ruled Last Night's Debate