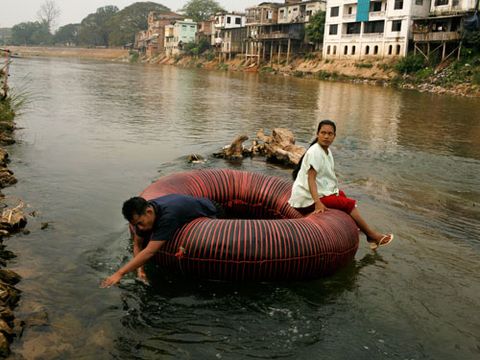 Crossing the border between Burma and Thailand by way of inner tube, Kyi Win, age 36, hopes to deliver her third child at the Mae Tao clinic in Mae Sot Thailand. In 2007 Dr. Cynthia's clinic, as it is locally referred to, provided free health care for 114,842 Burmese, half of whom crossed the border in need of medical assistance. The clinic delivered 2000 Burmese babies last year.

Burma's repressive military regime known as the SPDC (State Peace and Development Council) has denied its impoverished majority proper safe and affordable health care. Corruption is rampant within hospitals, which lack even basic medical supplies. UNICEF estimates that Burma spends an average of US $0.40 per person per year on health care (compared with $61 in Thailand). The World Health Organization has ranked Burma's health care system second worst in the world (after Sierra Leone's).

It is no wonder that women like Kyi Win are forced to find medical care outside of their country. However, travel to the border remains a challenge for many women. After nearly six decades of civil war the border areas of Eastern Burma are littered with landmines, and crimes such as rape are common.

Fording the Thaungyin river is a safer route for Kyi Win, who, after her first contractions, heads out nervously, hoping to make it across the river before her labor progresses.