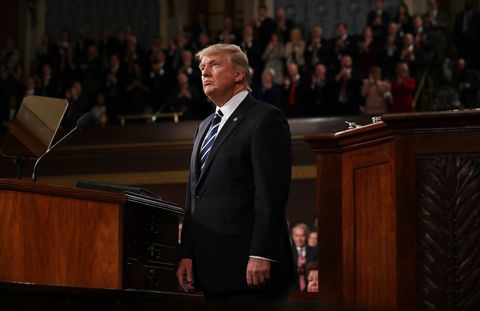 Update, 4/7: Twitter has voluntarily withdrawn its lawsuit against the U.S. government regarding recent pressure to unmask the identity of one of the site's users, specifically an account critical of the president, Reuters reports. According to court documents, the DOJ contacted Twitter this morning saying that the government had withdrawn its summons demanding the name(s) of the account holder(s).

So keep tweeting out your grievances against the government people. That's democracy!

Original Post, 4/6: For all its talk about former national security adviser Susan Rice, the Trump administration has tried to do some unmasking of its own.

Apparently government agents have been attempting to reveal the identity of the person or people behind @ALT_uscis, an account critical of Donald Trump's immigration policies. And now Twitter is suing the government in order to protect the account-owners' identities.

The account is just one of the many "alternative" Twitter accounts that surfaced after Trump took office and began silencing certain agencies' social media pages. (The National Park Service may come to mind.)

In their lawsuit, Twitter claims that the government sent them a summons in March demanding they reveal the identity of the Alt Immigration account's owners. They argue that compliance would violate the First Amendment.

This could threaten other users' ability to be critical of the Trump administration anonymously.

It further argues that if the government is successful on this summons, it could threaten other users' ability to be critical of the Trump administration anonymously.

While the lawsuit is a massive step, it's not Twitter's first against the government. In 2014, Twitter sued the Obama administration over restrictions they imposed on posts about surveillance requests. Twitter also has a long history of protecting user data. As Mashable reports, Twitter was not one of the companies shown to be feeding the National Security Administration information about their users in whistleblower Edward Snowden's leaks.

As for the new lawsuit? They're not alone. The ACLU announced on Thursday that they would also be joining in the suit to protect internet users' right to free speech.

We're glad Twitter is pushing back. We'll be going to court to defend this user's right to anonymous speech. https://t.co/tqj5XrNvgn

This content is created and maintained by a third party, and imported onto this page to help users provide their email addresses. You may be able to find more information about this and similar content at piano.io
Advertisement - Continue Reading Below
More From Politics
Give Domestic Workers the Protections They Deserve
Kristin Urquiza Wants Justice for COVID-19 Victims
Advertisement - Continue Reading Below
A Breakdown of VP Harris's Net Worth
WH Announces Removal of the Hyde Amendment
What Liberation Means This Juneteenth
Kathryn Garcia: It's Time to Step Up or Shut Up
A Valedictorian Speaks Out Against Abortion Bans
Standing Between Care and Violence
Seeking Healing a Century After the Tulsa Massacre
What to Know about Texas's Abortion "Trigger Ban"