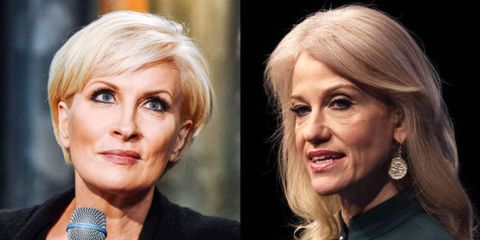 Morning Joe co-host Mika Brzezinski called out White House senior adviser Kellyanne Conway Friday morning, attacking the counselor to the president for some of her outrageous claims. "It's unbelievable that she works in the White House," Brzezinski said.

One of the host's biggest points of contention with Conway was her claim that the federal government was spying on citizens through their microwaves. Brzezinski called the assertion "ridiculously stupid," and said Conway's continued employment was "really kooky—and that's being kind." 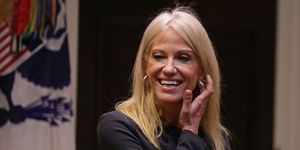 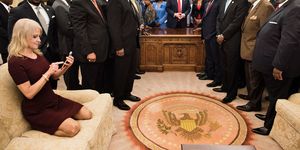 Brzezinski isn't the first person to call attention to the fact the Conway hasn't been fired by the Trump administration, despite her habit of making ridiculous off-the-cuff comments. Conway was sidelined from television appearances in late February after she said former National Security Adviser Michael Flynn had the president's "full confidence," just hours before Flynn's resignation.

On the other hand, she faced little to no censure for her references to a fictional terrorist attack in Bowling Green, Kentucky—a statement that she was widely ridiculed for. Late last month, the Office of Government Ethics recommended that the White House investigate Conway for ethics violations after she promoted Donald Trump's daughter Ivanka's clothing brand during a television interview in her official capacity.

It remains to be seen whether or not the Trump administration will discipline Conway, considering the president himself has also tweeted about his daughter's brand.

My daughter Ivanka has been treated so unfairly by @Nordstrom. She is a great person -- always pushing me to do the right thing! Terrible!