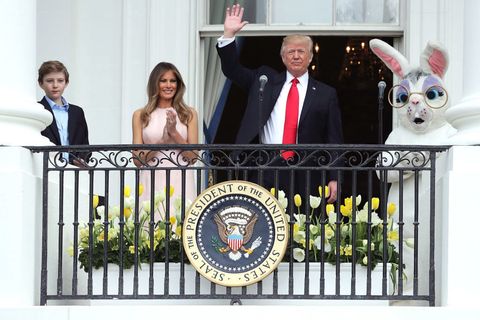 On Monday, President Donald Trump and family continued one of America's most time honored traditions by hosting their very first Easter Egg roll at the White House.

Even before the 139th annual White House Easter Egg Roll kicked off, there was concern about it being a disaster after the vendor that traditionally supplies the commemorative wooden eggs as party favors tweeted to say the deadline was fast approaching, making it appear that efforts to prepare for the event were harried.

Ultimately, however, Melania, for whom the stakes were the highest as the event is one of the greatest reflections of her role as the First Lady, managed to pull off an event that included "traditional" elements like an egg roll with wooden spoons, an egg dying station, a cookie decorating station, an art wall, a military band, and a thank-you card station where children could write notes to members of the armed forces. There was even a miniature press secretary podium where kids could try out Sean Spicer's job (insert obvious joke here).

Melania also made a stop at the reading nook, where she read some of Kathie Lee Gifford's children's book, Party Animals, which she said she chose "because it shows that we are all different, but we are all the same." Spicer also read from a book called How to Catch the Easter Bunny (more on that later), and was in close proximity to his favorite costume ever.

On this Easter Sunday, let us all pause and remember when Sean Spicer was the White House Easter Bunny in 2008. pic.twitter.com/OyhJspmOlZ

A great day at @whitehouse for the 139th #EasterEggRoll #whitehouse

The day didn't go off without a hitch, however, as Melania had to nudge Trump to remind him to place his hand on his heart during the National Anthem as he addressed the 21,000 people who attended the roll from the White House balcony. Obviously, this moment has been immortalized as a viral tweet.

He also signed the hat of a kid who asked for his autograph...only to then throw the hat into the crowd.

A kid asks Trump to sign his hat at the White House Easter Egg Roll. The president signs ... and then tosses the hat into the crowd. pic.twitter.com/7ExdhpO97H

But, really, the entire day was meme-worthy:

“We're right on track. You see what’s happening,” President Trump tells a crowd of children while standing with the Easter Bunny pic.twitter.com/cclnDyNxcm

This bunny is all of us, all of the time. pic.twitter.com/bDjMFgAf3M

siri show me worst hip-hop trio of all time pic.twitter.com/8bZP8AHZCZ

who's the new press secretary pic.twitter.com/SQLWyQDH11

Sean Spicer reading "The Little Hitler That Could" to an English 1800's orphan/chimneysweep. pic.twitter.com/xKBXcjtpFD

The White House Easter Egg roll is the only event where Trump will let women decide what to do with their eggs.

Yeah, that's me. You're probably wondering how I ended up in this situation...#EasterEggRoll pic.twitter.com/S8SpsbMiJz

This reads like the bunny is the First Lady and I can't stop laughing. pic.twitter.com/mzg07QmchY

A+ subtle trolling from Elmo at the Easter Egg Roll pic.twitter.com/piRNQn3MZm

To be fair, the Obama's final White House Easter Egg Roll had more than 35,000 attendees, including Beyoncé, Jay-Z, and Blue Ivy, so it was always going to be hard to beat.

The A-listers at this year's WH #EasterEggRoll are... the Martin Family Circus driving up to DC in their RV. https://t.co/U7EL2lyZQj pic.twitter.com/eunwa1S2AZ