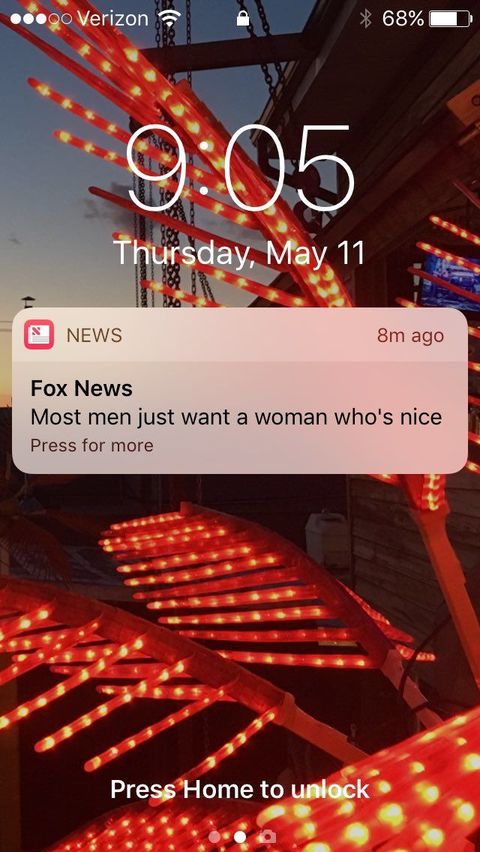 On Thursday morning, Fox News sent out a push alert to its Apple News subscribers that read, "Most men just want a woman who's nice."

Stop the presses, Y'all! @FoxNews just sent me this alert. pic.twitter.com/xEjzylXR7W

Obviously, people were a little confused.

And angry because whichever way you spin it it's belittling to both men and women.

Is this a message from the past?

Fox News alerts, like if 1950s could text you pic.twitter.com/cWHEJdsP2v

Fox News has yet to comment on the push alert, but it refers to an eponymous story published today by Suzanne Venker. The article, which sounds like a lecture that your grandmother would give you on Thanksgiving to explain why you're still single, argues that while women say they want a nice guy but really want a bad boy, men actually just want a nice girl!

In case you're confused about what it means to be "a nice girl," the author elaborates in her opening paragraph:

At the end of the day, most men just want a woman who's nice. "Nice," to a man, means being soft, gentle and kind. It means asking your husband how his day was and really listening. It means doing something nice for him with no expectation of getting something in return—you know, the way you did when you were dating. But wait a minute, you say. Don't women want the same thing? A man who's nice? Not exactly. Most women do want a man who's kind, but that's not the same as nice. Ask any guy you know, and he'll likely give you example after example of women they know who said they wanted a nice guy but in reality wanted a bad boy. That's because just as most men are attracted to femininity, or softness, most women are attracted to masculinity. And masculinity is hard. Gruff. Take charge.

Thank you, Fox News. Thank you for this hard-hitting piece of journalism, and for this invaluable advice that I will curl up with in my lonely, single nights.

Advertisement - Continue Reading Below
More From Politics
Mayor Pete's Husband Would Be a "First Gentleman"
How a Parkland Mom Turned Her Grief into Action
Advertisement - Continue Reading Below
He Voted for Trump. She Voted for Bernie.
How Guerrilla Feminists Are Fighting Femicide
Who Was Mayor Pete's Father, Joseph Buttigieg?
Everything We Know About Senator Warren's Husband
Nancy Pelosi, Icon, Ripped Up Trump's SOTU Address
Thoughts From a First-Time Caucus-Goer
And Now, a Word From the Future Voters of Iowa
Ayanna Pressley Wants Total Justice for Survivors