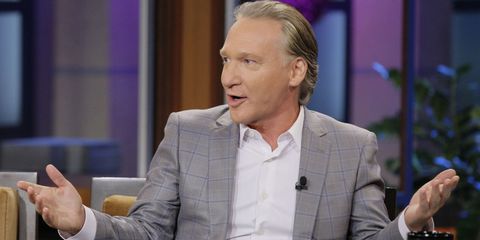 On an episode of his show Real Time With Bill Maher on Friday, the host used a serious expletive on air, which has shocked audiences everywhere. While interviewing Nebraska senator Ben Sasse, Maher used the N-word as part of a joke. Stunned, Sasse didn't respond in the way he wanted to, and has since posted his real feelings about the incident on Twitter.

But it isn't just Sasse tweeting about the inappropriate and offensive line, that the show's audience all appeared to laugh at. Black Lives Matter activist Deray Mckesson posted several tweets questioning the host's behavior.

But really, @BillMaher has got to go. There are no explanations that make this acceptable. pic.twitter.com/K5XlEjekQ9

Several viewers are calling for Maher's show to be suspended altogether.

Please @HBO Do Not Air Another Episode Of Real Time With Bill Maher.

And members of the live audience have even tweeted, questioning why Maher would think it was appropriate to use the word on TV.

I KNOW one of us was in that Bill Maher audience like 😳. He was WAYYYYY too comfortable. pic.twitter.com/wUO8q7YWAR

HBO, which aired the show, has called Maher's actions, "inexcusable and tasteless", although it's unclear if any further disciplinary action is being taken. But, thanks to the internet, audiences everywhere are making it clear that Maher's language was unacceptable and won't be tolerated.

Amy Mackelden Weekend Editor Amy Mackelden is the Weekend Editor at HarpersBAZAAR.com, where she writes about entertainment, celebrity news, beauty, and fashion.
Advertisement - Continue Reading Below
More From Politics
Behind the Controversy at the Women's March
Women Are Not Granted Equality in the Constitution
Advertisement - Continue Reading Below
Electability Is About Us—Not the Candidate
Everybody Running for President In 2020
Time’s Up for Wall Street
Women of Color Ruled Last Night's Debate
Cory Booker, Rosario Dawson Are Traveling Together
Is Megyn Kelly a Feminist or What?
Door Knocking With Field Organizers in Iowa
“I Was Illegally Billed Seven Times for My Rape”