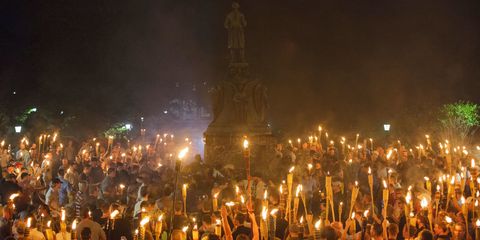 One of feminism's greatest contributions to society was convincing the American public that rapists are not ominous figures hiding in the bushes, but men we know—our friends, sons, teachers, and pastors. That shift in our mainstream understanding of sexual assault was necessary to end the social cover given to perpetrators of sexual violence. We needed to know that people do horrible things, even the people we love.

So as the country reels from the attack in Charlottesville, Virginia, let's not forget that lesson and claim that racists are anomalies or outliers. Despite well-meaning reactions and hashtags to the contrary, this is who the United States is. Of course this is us.

"This country was built on systemic racism and continues to engage in a self-serving revision of racist history."

The pictures out of Charlottesville—angry white people, mostly men, carrying torches in the middle of the night, faces distorted by hate—are nearly indistinguishable from historical images of racist Americans over the years. They can call themselves "white nationalists" instead of "white supremacists" but let's be real: They look the same because they are the same. This country was built on systemic racism and continues to engage in a self-serving revision of racist history. That core of who we are has not shifted nearly as much as we would like to believe.

Above, a scene from the march on the University of Virginia on August 11, 2017; below, Ku Klux Klan members burn torches at a rally in Connecticut in 1980.
Getty Images

It's comforting to insist that racial hatred is not who Americans are, but at best it excuses white apathy—we don't have to interrogate our values if they're fine as is. At worst, it provides dangerous cover to violent racists.

Consider Peter Cvjetanovic, a college student whose image went viral this weekend, insisting that he's not "the angry racist they see in the photo." Or the mother of James Alex Fields, the man arrested for killing 32-year-old Heather Heyer after plowing his car into a group of counter-protesters; she told reporters that she didn't know her son was going to a white supremacist march: "I thought it had something to do with Trump." Fields' former teacher, though, says "he was very big into Nazism...he really had a fondness for Adolf Hitler." 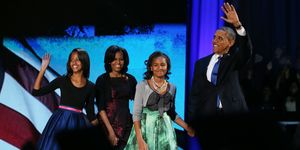 On Holding Sasha and Malia to an Unfair Standard 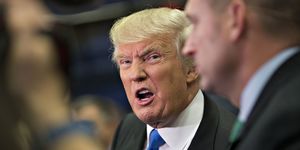 Why Trump Is So Afraid of Trans People

Are we really to believe that Fields' mother didn't know who he was? That Cvjetanovic doesn't recognize his own racism? Or have white Americans so completely distanced ourselves from how ordinary racism actually is that we don't see it even as it stands beside us?

It's the same blind reaction that claims connecting the Trump administration to the racist violence in Charlottesville is an unfair conflation rather than a reasonable connecting-of-dots. We have a president with a long and clear history of racism: His family company was once investigated for refusing to rent property to black Americans. He launched the birther campaign against President Obama. As a candidate he stoked racial hatred with derogatory comments about Mexicans and Muslims; as president he's filled his administration with men who have widely criticized records on race, called for a Muslim ban, and refused to call out white supremacism by name until forced by public outcry.

"Have white Americans so completely distanced ourselves from how ordinary racism actually is that we don't see it even as it stands beside us?"

So yes, racism absolutely is American. It pervades our homes, our streets, and our government. Not in the past, not as some ephemeral evil—but now, everywhere.

The Republican party and those who voted for Trump want to insist that they are not part and parcel of the extremist violence we saw in Charlottesville. They rush to tweet out condemnations and distance themselves from men carrying torches—as if their support of Trump did not provide the fire.

We cannot end racist violence and white supremacy without telling the truth about who we are and what we've enabled. This is us. But it doesn't have to be.

Jessica Valenti Contributing Editor Jessica Valenti is a columnist and author of five books on feminism, politics, and culture.
This content is created and maintained by a third party, and imported onto this page to help users provide their email addresses. You may be able to find more information about this and similar content at piano.io
Advertisement - Continue Reading Below
More From Politics
A Valedictorian Speaks Out Against Abortion Bans
Standing Between Care and Violence
Advertisement - Continue Reading Below
Seeking Healing a Century After the Tulsa Massacre
What to Know about Texas's Abortion "Trigger Ban"
A New Book Invites Us to Rethink Menstrual Equity
We Must Remember George Floyd's Legacy
This Is How Much Joe Biden Is Worth
Joe Biden's Granddaughter Is His Biggest Fan
Watch Katie Porter Destroy a Big Pharma Exec
SCOTUS Will Hear a Major Abortion Case