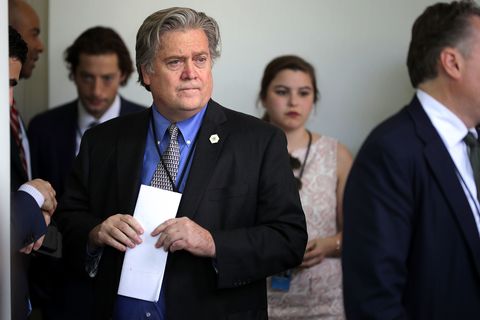 It finally happened: On Friday, news broke that President Trump was pushing out Steve Bannon, his chief strategist, though it was unclear whether he resigned or was fired. Bannon, who was the former executive chairman of so-called "alt-right" site Breitbart News, exited just a week after a racist rally in Charlottesville, Virginia—and Trump's insistence that people on "both sides" of the protest were to blame for the violence.

The news of Bannon's exit was met with a flood of reactions online—and a lot of them weren't too kind to the former White House staffer. Check out some of the funniest highlights.

Congratulations, everyone who had Steve Bannon as the next Confederate monument to go down.

BREAKING: Donald Trump sends Steve Bannon away to find the cure for greyscale. "I command you to heal yourself," Trump said tearfully. pic.twitter.com/fj4pdI1occ

🚨Trump White House Admits Steve Bannon Died In January, Has Been Weekend At Bernie-d In Photos Since.

fake news; nothing can convince me that steve bannon can run https://t.co/BF6sjwRI2s

Why no, I'm NOT proud of it. Look we're all just marking time on spaceship earth

Steve Bannon can leave the White House with his head and right arm held high.