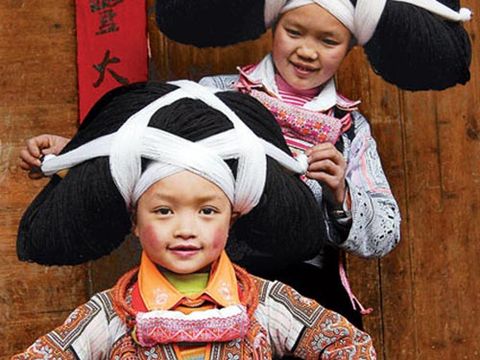 THE WOMEN: Miao women, also known as Hmong, are an ethnic minority in China numbering 9.6 million. Within the Miao, the hairstyle of one subgroup has earned them the name "Long Horns."

THE LOOK: Long Horn Miao women place U-shaped pieces of wood on top of their heads and wrap their hair around it, simulating the effect of a giant set of horns. The coif is secured with a white cord. If it looks like all this hair is too much for one head to grow, well, it is. "Frequently, the girls and women will weave their ancestors' locks into their own hair," says Dru C. Gladney, Ph.D., professor of anthropology at Pomona College in California. "Up to four generations of ancestral hair may be incorporated." Linen and wool are added to fill out the hairpiece, which is bound around the horn in figure-eight fashion.

THE MEANING: In rural China, water buffalo and oxen are an integral part of Miao life. A hairstyle reminiscent of these animals pays homage to the power of nature and the animal kingdom. "The Long Horn tra-dition is probably about 2000 years old," Gladney notes. "Female family members help weave the hairpieces, with younger women's hair generally being the most elaborate."

WHERE THEY STAND: Though they are not equal to men in the tribe, Miao women enjoy certain perks, like the right to refuse a suitor's marriage proposal until he proves (through betrothal gifts of cattle and silver) that he is worthy of her.

BEAUTY QUIRK: In the past, Miao men also wore similar horn hairstyles. Says Gladney: "This gave rise to the idea that the wearer of such a hairstyle had the 'strength of an ox.'"

THE WOMEN: Members of the lower castes in India, devadasi girls are handed over to a local temple by their parents as an offering to the Hindu gods. They remain "married" to the temple until death.

THE LOOK: Their hair is often long and matted, similar to the dreadlocks of Jamaica's Rastafarians.

THE MEANING: "Long hair and sensuality are deeply connected in Indian mythology," says Ranjanaa Devi, director of the Asian Arts and Culture Program at the University of Massachusetts. "In religious texts, every verse is depicted by a goddess with long hair spilling down her back." "The sole pride of a devadasi is her matted hair, known as jaedi," says Aroon Thaewchatturat, a photojournalist and expert on Indian culture.

WHERE THEY STAND: Once believed to be the bearers of good fortune, devadasis were invited to weddings of upper-caste members. Today, devadasis are often exploited by temple priests, who sell them to brothel owners for prostitution. The practice has been outlawed, but it persists across the country.

BEAUTY QUIRK: Devadasis in southern India often wear a necklace of colored beads that they never remove, a reminder that they are married to a deity and thus forbidden to marry a mortal.

THE WOMEN: Seminomadic pastoralists in Kenya.

THE LOOK: In the heat of the Serengeti desert, Masai women wear their hair short. (The practice also keeps the scalp free of insects and disease.) Another reason for the close crop: "It shows women as opposites to the young moran [male warriors], who wear their hair in long plaits," explains art historian Klemm.

THE MEANING: Masai women adorn their cropped hair with intricate beadwork. The colors, patterns, and styles of beads reveal personal information about the wearer-her age, her marital status, and even how much money her husband has.

WHERE THEY STAND: The Masai are a patriarchal society. Girls serve as companions to the warriors, and it's the male fighters who command respect in the community. Women don't own cattle-the item by which wealth is measured-but they do maintain the livestock until their sons are old enough to inherit it.

THE WOMEN: Members of a semi-nomadic tribe in Namibia.

THE LOOK: A concoction of butter and ocher, a type of iron ore, is used to coat the hair. Next, hair is divided into several plaits: "A girl wears four braided plaits, with two braids hanging over her face," says art historian Peri Klemm, Ph.D. "At puberty, female relatives replace these with smaller braids that completely cover her eyes." On her wedding day, a woman pulls her braids back with a headdress.

THE MEANING: The glossy sheen of the butter-and-ocher paste sends "look at me" signals to suitors-dry hair is a turnoff to Himba men, says David Crandall, Ph.D., a professor of anthropology at Utah's Brigham Young University.

WHERE THEY STAND: Women are seen as the weaker sex-literally: "Females are thought to have only one lung. How else to explain that men can outrun them?" asks Crandall wryly.

BEAUTY QUIRK: Hair anyplace but the head is considered offensive.

THE WOMEN: Gei means arts in Japanese; sha means person. Put them together, and you have a professional hostess who entertains guests using various traditional arts, including tea ceremonies and ikebana (flower arranging).

THE LOOK: All adult geisha today wear wigs, generally in the traditional bun or shimada style. The maiko, or apprentice geisha, wear their hair in a style called momoware-the most familiar image to Westerners-which resembles a split peach. "There are six variations of momoware," says Liza Dalby, Ph.D., an anthropologist who was an adviser on the film Memoirs of a Geisha.

THE MEANING: "The hair of a geisha balances the line of the trailing kimono and should be considered a form of wearable art," says Dalby. "It's like a sculpture-something to look at, but not to touch." It may be art, but it's also a science: Geisha go to great pains to follow the template to the last detail.

WHERE THEY STAND: Geisha, contrary to common Western portrayal, are not prostitutes. Increasingly in Japan, due to tourist interest, geisha are considered keepers of traditional Japanese customs.

BEAUTY QUIRK: "Maiko use wooden stands underneath their heads for sleeping," to keep their elaborate hairdos intact, says Dalby.