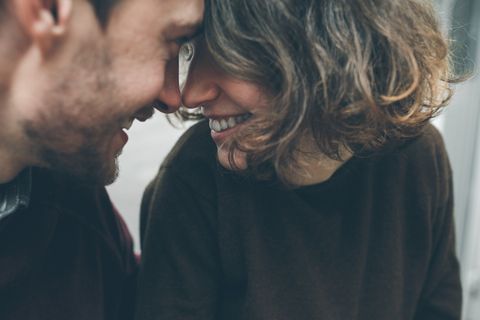 Earlier this year, 27-year-old entrepreneur Michael Bruch started Sweet Pea, a dating app that aims to improve how we communicate with one another. If you are reading this on a smartphone, you may be rolling your eyes: There are, precisely, three hundred dating apps out there—all of which claim to have the same goal. But Sweet Pea, which soft-launched five months ago and officially goes live this month, is different. For one, there’s a much bigger focus on conversation. Profiles are detailed and extensive, users can browse for matches by searching hashtags pertaining to their interests or topics of conversation, and then there's the app's signature: an "icebreaker" question users add to their profiles, giving potential matches an easy way to strike up a discussion (sans the boring "Hey, whats up?" messages common on what feels like every other dating app).

Ahead of Sweet Pea’s upcoming launch, we sat down with founder and CEO Michael Bruch to talk about dating in the digital age, what the online dating space is missing, and the many (many) steps he’s taken to build a better dating app.

What makes Sweet Pea different from other dating apps?

Michael Bruch: When you first sign up, every user is asked to create an icebreaker question for your profile. It could be whatever you’re thinking about at the time, or any topic of conversation. The icebreakers help people find some sort of common point of interest and begin a conversation. You can also upload videos, create stories and statuses, and tag activities or locations, which you can use to search for matches. We’ve created all these different ways to find people to relate to and start a conversation with.

Was this something you’d always wanted to do?

MB: No. When I graduated from New York University, I didn’t know what I wanted to do. My dad is a lawyer and has his own practice in D.C., so I went to work for him as a paralegal. I did that for about a year and decided that I hated it—it just wasn’t me. Meanwhile, while I was working there, I started building my first app, called Willow. It was a more extreme version of what Sweet Pea is now.

The idea was to create an app where people aren’t meeting each other because of how they look, but because of what they have to say. There were no photos, just an icebreaker question and a short profile. I didn’t really know how it was going to go, but ELLE wrote an article about us and we got 10,000 users in the space of a week. Eventually, we had around 300,000 users, but there was something about the format that required a little bit too much patience from people. So from there, we started researching and building Sweet Pea.

Why a dating app, though? There are so many out there already.

MB: About six years ago, I began having this feeling that there were going to be a lot of adverse consequences in terms of how social media platforms affect us socially. So I’ve had this “North Star” idea guiding me: How can you use social media as a way to bring strangers closer through conversation? I wanted to make it feel more human and nuanced, and less transactional than other platforms like Tinder or LinkedIn.

Recently, one of the early executives of Facebook, Chamath Palihapitiya gave a talk where he admitted that he doesn’t want his children using Facebook or Instagram. They were created with good intentions, but they’ve had all these ill consequences for society and civil discourse. A lot of people reacted to it—and kind of related to it. I don’t know if the answer is creating new platforms, or working within the old ones, but I figured I may as well give it a shot.

What did you find in your research while building Sweet Pea?

MB: I asked a thousand different people about their experiences using dating apps. There's an analogy about a crappy dive you go to in college: “I don’t even like this bar, but everybody else is here, so fine, I guess I’ll go.” That kind of seemed to be the consensus around a lot of these apps. People felt like, “Okay, a lot of people are on them, so I will use them to meet new people, but it doesn’t necessarily feel ideal.”

I’d ask: “How many matches turn into conversation?” And people would say, “Oh, one in every fifteen.” So I'm trying to solve that with a tangible product and make the app experience feel a little bit better.

"My inspiration has come from what I’ve experienced in real life and what wasn’t translating into digital space. Like that spark you feel."

How did your personal experience with dating apps or social media inform the development of Sweet Pea?

MB: Most of my inspiration has come from what I’ve experienced in real life and what wasn’t translating into digital spaces. Like that spark you feel when you just click with someone and have a really great conversation—it could be something serious, or something silly. It’s really hard, on most dating apps, to feel that.

A lot of people use apps as more of a casual game than really wanting to have a conversation and meet someone. And I don’t think that’s because people don’t want to have conversations and meet people; I think it's just what the environments ask of us, or allow for, when you’re just swiping really really fast. So, my goal was trying to recreate that “spark” digitally.

What do you hope users get out of Sweet Pea?

"People are getting worse at just having conversations with strangers."

I want to help people find healthy, happy relationships and make the world feel like a little bit smaller of a place. People are getting worse at just having conversations with strangers. It’s not just a problem with dating apps, it’s social media in general that hasn't done a good job at helping us empathize with strangers. It's very conceivable that Gen-Z'ers are going to go on their first date through dating apps and learn about romance, companionship, courtship through dating apps. So, the idea is about helping people relate to each other better.

You plan to donate a portion of profits to charity.

MB: Unhealthy relationships are one of the biggest and most overlooked problems in this country, from a funding perspective. We plan to donate 10% of profits to charities focusing on issues like domestic violence and dating violence. I don’t want to come across as that like, woke white male feminist, because that’s not the case at all. I just want to do my part.

What do you hope to see in the app’s future?

MB: Broadly, of course, I’d love to be the app that everybody wants to use to meet someone new. I don’t have the money that other apps like Tinder and Bumble do to spend on marketing, so I can’t really compete in that way right now. But what I can do is build a better app. I can build a product that I think will be a much better experience for users. I’d like to be the app that people think of when they say, “I don’t really want to hook up, I want something a little more substantive.” I mean, I’m not here to tell people not to hook up, but if that's not something you want to do, the options are pretty limited. I want to change that.