Today's Top Stories
1
The Biggest Trends From the Spring/Summer Runways
2
Where Did All My Work Friends Go?
3
Not Your Mom's Book Club
4
Iconic Fall Movies to Get You in the Spirit
5
Princess Beatrice's Daughter May Get a Royal Title
Getty / Stocksy

Dave held my face in his hands.

“I’m sorry you have to see me like this,” I cried. “I hate it. I don’t want you to have to nurse my broken heart over another—”

“Psh,” he cut me off. “You don’t buy the Mercedes thinking it will be cheap to maintain,” he said. “I always knew exactly what I was getting into.”

It wasn’t the first time Dave had given me this speech. He has comforted me through a fair number of breakups with other men throughout our marriage. Each time, I tried my best to hide my hurt from Dave. I didn’t want to burden him. But some emotions are too powerful to hide from your spouse of 17 years.

Dave and I stumbled into our open relationship. We were in our late 20s when we had a drunken one-night stand with a much more seasoned couple. We knew they were openly “swingers” (their preferred term at the time), but we had planned on an exploratory conversation and maybe some light smooching. Whiskey changed our plans.

Leaving their hotel after having experienced “a full swap” (changing partners for intercourse), Dave and I high-fived and screamed with glee, our voices echoing across the abandoned late-night Michigan Avenue. Breaking the norms of our stifling Protestant upbringings felt exhilarating. Our marriage had never entertained much jealousy, and once we crossed this line we easily gave each other free rein. Suddenly, I had permission to be boy-crazy again, a trait I’ve identified with for as long as I can remember.

I wanted every moment to feel like the climax of a romantic comedy. I loved the escalating dopamine, the swooning, the anticipation. Close relationships with other (mostly) men and (occasionally) women provided me with an escape from real-life drudgery in a way my marriage never could, because my marriage was tied up in shared stresses like finances and sick dogs and exploding kitchen pipes. My side relationships, on the other hand, had all the passion and vibrancy of a Cardi B collaboration video, even if they consisted mostly of getting high and watching old movies.

But more than a decade of extramarital relationships later, COVID hit, squashing any potential for new partners. In April 0f 2020, right around the start of the pandemic, Dave and I sold our home in Chicago to live in eight small towns across the U.S., staying in Airbnbs for two or three months at a time. COVID brought me (along with existential dread) a significant dearth of cute guys. Before leaving Chicago, I had been dating a younger man, but I moved and we broke up. Dating new people outside Chicago felt scary: Our new locations were too small and stigma from nosey neighbors was too much of a risk. Plus, with risk of illness or death from the virus, I remained unwilling to enter a grocery store, and much less willing to let someone enter, well, me. Dating no longer felt like an option.

I found myself curiously relieved by my newfound monogamy. In part, it provided a reprieve from the steady stream of guilt my external relationships created in the past.

A few years after Dave and I began seeing other people, Dave’s interest in dating waned. He didn’t mind that I continued to date, but had grown bored with it himself. “It’s not worth the work,” he would say. Dave craved simplicity, precision. Perfectly folded T-shirts and relationships with clean lines. While Dave continued to enjoy the existence of his permanent hall pass, and flirted regularly, he dated rarely.

I had always hesitated to tell anyone about our open relationship. While some close friends were understanding and open-minded, others might be uncomfortable. Then, when Dave stopped dating others, I grew more ashamed. More so than how others viewed me, I feared how it made Dave look, letting his wife cavort around town. He deserved better. He deserved a good wife, a wife who didn’t need boyfriends. My insecurity grew more and more intense.

“I don’t care what other people think,” Dave would remind me when I brought up these concerns. I would be temporarily pacified by his comfortable confidence until I experienced the next heartbreak, brought on by an out-of-work bartender with killer abs, and would turn to my husband for support. He didn’t like to see me hurt, and he understood that these relationships were valuable to me. While he comforted me, affectionately likening me to luxury automobiles, it soothed my guilt—for a bit. I couldn’t quit dating others. The highs were worth the lows. I loved the attention.

I had told Dave repeatedly that I would stop dating other guys if he ever wanted me to. Our security as a couple was paramount. That didn’t mean that I wasn’t deeply afraid to lose my open relationship. Would I resent Dave? Would I be bored or depressed? Was non-monogamy a vice I would replace with something else? Would we both be...happy?

COVID didn't leave us with a choice. But to my surprise, I didn’t miss dating at all. Dave and I didn’t spend one night apart for an entire year. Certainly we had days when we had to shut ourselves in separate rooms lest there be blood, but who didn’t? Dave and I were lonely at times, but I didn’t crave extra romance. We enjoyed our simple, quiet, streamlined life.

Our open relationship soon felt like a thing of the past. The lack of opportunity to date others also removed opportunities for me to shame myself, providing a clearer head with which to examine our marriage. The pandemic let me feel mentally safer unearthing all my prior messy relationships and emotions.

I tentatively researched open and “alternative” relationships. I followed the Polyamory tag on Medium and Instagram. I read (free excerpts from) The Ethical Slut. I admired Frida Kahlo and her circle of lovers. I investigated the exploits of my ancestors in the court of Louis XIV, and learned that women in my family have been addicted to boytoys since the 17th century. In 2021, polyamory is all over the media. Though the Gen Z guy I dated just before COVID acknowledged that “nearly half” of his friends were in open relationships, I hadn't yet realized that the stigma toward polyamory, particularly in cis-hetero relationships, was lifting until I researched it for myself. (Some would argue that polyamory has long been considered more acceptable in various queer circles.)

In polyamory culture, folks talk about “new relationship energy” (NRE), which is that delicious neurotransmitter cocktail I mentioned before—the “climax of a romantic comedy” vibe. When breakups happen in this state, and NRE is taken away, it hurts. This is just one lesson that I learned during my research, and this understanding alone dramatically helped me with past guilt. Hearing and reading more about the experiences of other folks who are polyamorous encouraged me. The heartbreak I experienced during breakups with other men was normal, to be expected in non-monogamy, and certainly didn’t mean I was a bad wife. Finding others who had relationship experiences like ours was incredibly empowering. There are so many poly women who confidently own the traits I hated myself for. Knowing that others are out there, telling their stories, helped me transcend self-stigma. Talking to my therapist remotely also helped me come to that conclusion.

I began to accept that everyone has complex needs. Maybe it’s fine that I had needed more than one lover. Maybe it's also fine that I might not need one anymore, or that I change my mind about it later, and that I don't hate myself for it it either way.

For more than a decade, I had held myself, and Dave, to the same patriarchal norms I feared society, family, and friends were holding us to. Dave and I were always happy together. Instead of beating myself up for so many years, I wish I had been as progressive and accepting of myself as I was of others who chose non-normative relationships. I wish I hadn’t been so afraid to “be polyamorous” that I avoided learning anything about it. And I wish, most of all, that instead of wondering Why am I like this? I had instead thought Who cares, who’s next? It took a real break from my relationships to step back, and listen to and accept my needs.

Recently, I asked Dave how he felt the pandemic had changed our relationship with regards to monogamy, and he shrugged. “I barely noticed,” he said. Of course. Dave never had an issue with my dating others; I was the one who beat myself up over it.

I finally did the most feminist, non-patriarchal thing I could, and listened to my husband. He was right. I am wonderful because of who I am, not in spite of it. I am the damn Mercedes. 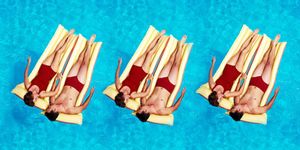