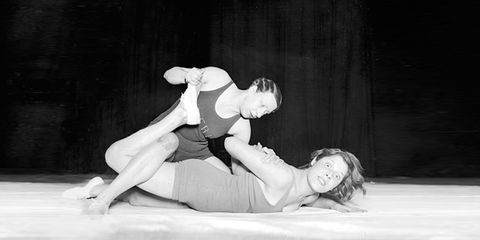 The text read, "You said you would laugh so hard when this happened to me…what was it?"

It spawned an elaborate guessing game between one of my best friends and me as I tried to solve the riddle. Did she pee her pants in public? No. Break a heel and fall on her face? Nah. Fall into a glass door? Not exactly.

Did I once actually say I would laugh when she got cancer? It's extremely possible. The two of us have been friends for over a decade. In that time, we've traversed the difficult territories of divorce, career uncertainty, near-fatal wrecks, and endless binge-drinking. And we've done it all with a wry, dry sense of humor.

"Are you laughing now?" she texted.

"If it makes you feel better, I am definitely cackling," I shot back.

My friendship with this woman is similar to every deep friendship I have with females. It is so raw and real that our interactions never hit just one emotional tone at a time. In fact, I've found that women who are intensely earnest in their sympathy and support don't have much to offer me. I choose to deal with the world in head-on collisions, and my friends are the copilots who keep changing the radio station just to bust my balls.

Because life's collisions are shocking, but you have no choice but to deal. Your copilot reminds you how much you still desperately care about crappy pop ballads from the '70s, even when you're crying; she connects you to a deeper part of yourself, even as the windshield collapses into your face.

"When you start losing your hair, can I tell everyone you're on meth?"

When I was raped, the first people I told happened to be men. They stood in stunned silence. Then they hugged me. It was an admirable effort. They didn't say anything super awkward or question me. They just held their arms out while I fell into them. But still, it wasn't enough. Their embraces felt, well, somehow condescending. That was not their intention in any way, but it's just how I felt—as though now I was a Victim and needed to be handled with kid gloves.

Later, I remained unsettled. My brain couldn't focus. So I found one of my female friends. I sat her down, and I said, "I was just raped."

She sucked in a slow, deep breath, took my hand, and looked into my eyes with great concern. "Well," she said, "did he at least bring you flowers?"

I was so shocked I let out a huge gasping laugh, and then farted at the same time.

We spent that afternoon and evening riding bikes, crying, and writing a song called "Dream Date Rapist" about the consolation gifts sexual assaulters should leave behind because really it's the least they can do. I didn't even know this was the kind of catharsis I needed at the time—but somehow, this friend, my fart, and this childish, offensive song made everything feel just good enough to carry on.

Some of you may read this and say it's all just too dark, not funny, and maybe even a little nasty. I disagree. If you have access to the internet, you've probably already noticed that the world is filled with pitiful, terrible people, and that thousands of websites devote themselves to painfully cute baby-animal videos simply to counteract how awful everything is. I can cry over the state of my existential dread on my own. With a friend, I seek something else.

I can cry over the state of my existential dread on my own. With a friend, I seek something else.

I'm fully aware that my desire for dark humor may stem from the women in my family, who've taught me that crying without laughing is just spilled salt looking for a sweet dish to go with. (See: the glory of salted chocolate chip cookies.) When my grandmother told me she's afraid of being alone after my grandfather dies, that she might wither away into a mess, haunted by the void this man would leave in her heart, I said, "Don't worry. We'll smother you with a pillow, and you'll go peacefully."

And then we laughed and laughed and laughed. There was nothing else to say. No platitude would make the idea more bearable, and no single hug could erase the eventual pain. Yes, he will die. She will be immediately and immeasurably hurt. And we will cry. But crying is boring and dehydrating. It has to stop sometime.

So when my friend told me she had cancer, I cried—but I didn't tell her that. She already knew that part. Instead, I texted, "When you start losing your hair, can I tell everyone you're on meth?"

She responded with a photo of Sigourney Weaver in Alien 3, bald and badass and backlit, then said, "Uhhh this is the best. I never had the guts to shave my head for this look!"

I thought of all the ridiculous things I've heard people say to one another at their worst times. I thought of the multiple friends who'd told me they had miscarriages, and the thoughtlessly hollow responses they got from acquaintances. How they wanted to rip that sympathetic person's head off.

And then I texted, "You know, everything happens for a reason."

"Fuck you," she replied.