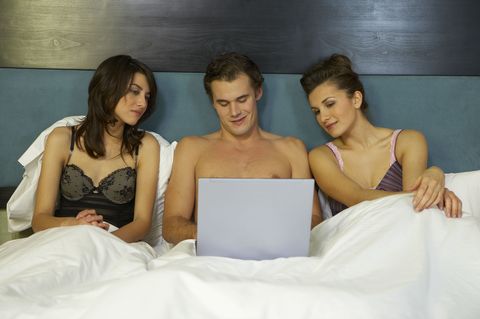 Three hours earlier, I had been in navy-blue sweatpants alone in my Brooklyn one-bedroom, eating nachos and binge-watching a TV series on Netflix about a vampire with a soul. I was mid-breakup, and when I say "mid," I mean my then-boyfriend had said, "I love you, but I don't want to live in New York, good-bye." He had moved to Wyoming nine months prior, which meant I should have moved on roughly four months ago, or at least progressed beyond the sweatpants-and-nachos-as-a-daily-routine phase. But I was still stuck in I-love-you-good-bye-land, mentally replaying how I'd walked him down the stairs and out the door—the jangle of keys, the snap of the lock, the final kiss; his footsteps slow, then fast and fading, then nothing—and how I'd run upstairs and thrown away the unused condoms, each representing a time we wouldn't have sex again. One, two, three, four, five. I pitched them even though the expiration date predicted I might use them, one day, with someone else, but those condoms were his and mine, so good-bye. Next I tossed the sheets and pulled on the sweatpants.

For the past nine months, I'd barely left the apartment, so it required heroic contortions of body and mind that night to sit in a basement theater where my junior-year college roommate—an ebullient Chilean actress and musician with porcelain skin—performed in a play about hipsters and wasted youth. Her ex-girlfriend had written it, basing my friend's character on her: bisexual and bawdy, an open and honest free spirit, wild and without shame. As my friend fake-drank real PBR onstage, I noticed a man in the audience she'd described years ago: a rockabilly who looked and talked like Elvis Presley and had crushed her emotionally. (She confronted him later, and he cooed, "Baby, I ain't never been nothing but sweet to you.")

At the upstairs bar, when Elvis sat down on a stool next to us, bought us beers and whiskey shots, and kept his face close to mine, I began to panic: He was flirting with me. Or was he flirting with her, when he brought up their sexual history? It would have been inappropriate of me to flirt with him, so I flirted with her, tickling her thigh. (Of all my friends, she was that friend, the one with whom you'd theoretically have a three-way.) There was a lot of coquettish, seductive energy and whiskey swirling among us, until I stated the fact: "We're going to have a threesome." None of us had any romantic aspirations—the rockabilly had no hold on her heart anymore—so it was all low stakes and high velocity.

A threesome hadn't ever been on my sex menu. I'd never had one, nor fantasized about one, nor stood within 10 feet of anyone who'd had multitasking sex. Sex with one other person was arduous enough. I hadn't even kissed a man for longer than 10 seconds until I was 20, and at 26, I hadn't deviated far from chastity—on top of which, I'd pressed pause on my whole romantic-emotional-sexual operation since the breakup/meltdown. But the alchemy of this night—the wild-and-without-shame friend, the man who looked and acted like Elvis, their libidinous past, my shedding of the sweatpants, the whiskey, the apartment's proximity—sent me hightailing it home to hurriedly clean while they stopped to buy beer.

Once inside my apartment, I decided to cancel. I wouldn't let them in. But my buzzer was broken, and the door downstairs was unlocked, and they showed up too fast. My friend sensed my nervousness, so she and I sojourned to the kitchen for a sidebar. She counseled me on the spot: "It's OK. Inhale. This is just your body learning how sex can break the paralysis inflicted by the past. Exhale." We inhaled and exhaled together until we were inflated with courage.

An infinite number of beers later, I suggested we play Truth or Dare, minus Truth. "Kiss her passionately on the mouth," my friend dared her ex. We retained an almost theatrical innocence. "Pull each other's hair," he dared us. "Take off my pants," I dared myself. She dared all of us to get into my bed. We were like small children on a bright, unexplored planet.

Prior to this night, my friend and I had talked about our menstrual cycles, our relationships, and other personal and awkward things, but what exactly we did during sex was a subject even we, the closest and oldest of friends, couldn't touch—until now. Seeing the way another woman had sex nudged me in new and unmapped directions. I witnessed her tell him what to do and what she liked. I paid close attention: Was she really enjoying herself? When her ex-boyfriend went down on her, I whispered, "Are you getting off?" She smiled at me, shook her head, and whispered back, "Not even close." Same!

"Are you getting off?" She smiled at me, shook her head, and whispered back, "Not even close." Same!

"Let me show you how this works," she intervened, instructing him. "You might like circular motions," she recommended to me. "Allow me to demo another way," she proposed to the group. We folded into gymnastic positions and even got a little rough, just to see, just to know what it was like.

Throughout, my friend was my friend, meaning she was kind, encouraging, generous, thoughtful, and complimentary. You know when a girlfriend says to you, "Nice haircut" or "I adore that dress on you"? This was just like that, but carnal, like, "You have a banging bod" or "Let me turn off the light first so no one sees my scars or your stretch marks, which don't exist anyway." The benefits of friendship transposed onto this night. We felt comfortable and unembarrassed getting naked in front of each other, and when she became tired, she'd motion to me, like a tag-team system, and I'd stimulate or get stimulated as she rested.

We felt comfortable and unembarrassed getting naked in front of each other.

After, as we lay cooling, smelling of three different types of sweat, it was how I envisioned it would be after a sexual revolution: no one jealous or insecure or hurt. For once, I didn't desire pledges of eternal fidelity or everlasting love. Sex was affirmative, friendly, and fun. I'd learned new, illuminating things, which should be the point—and I'd learned from a female friend, my inadvertent no-charge sex coach, who, in a few hours, had imparted sex-life skills.

Around 4 a.m., I gave her a look that conveyed I'd like to be alone then, and without hesitation, she said, "Time to put on your pants, Elvis. I'm calling a cab for us." In the darkness, we said good night, knowing the three of us would never be the three of us again. But the next day, I knew she would call me, because she's my friend, and the sacred relationship—our friendship—would survive undamaged. And it did.

This article was originally published in the July 2014 issue of Marie Claire.