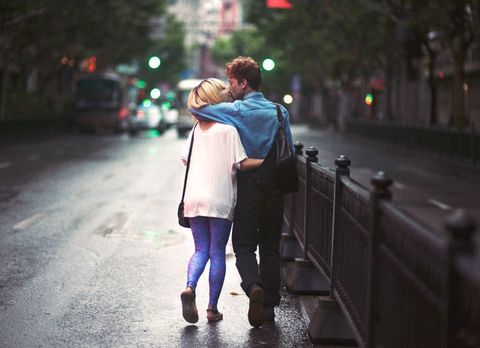 I recently came across a photo of a sexy Brazilian man I had an affair with a few years ago. (OK, I Googled him.) When I saw his sly smile and unruly black hair, I couldn't help thinking that, by comparison, my live-in boyfriend wasn't quite as darkly seductive or exciting.

I met the Brazilian in line for a film screening while visiting Manhattan from San Francisco. I was convinced I'd found my ideal man: intellectual, witty, artistic, and hot. We spent a passionate week together, and when I left town, I thought I was leaving behind a new long-distance boyfriend—one who, it turned out, didn't like to call or e-mail...ever. I thought our fling was the start of a relationship; he thought it was a fling, period.

Disappointing, but it fit my usual pattern. I would fall for a brilliant guy with an irresistible smile who never quite fell for me but who possessed all the qualities I liked in a man: a sense of humor, certified smarts, smoldering looks. Each time, these men—dashing chefs, moody architects—would give me just enough attention to keep me in their narcissistic orbit. Whether or not they'd ever call was just part of the thrill, always keeping me on edge. Outwardly, I told myself I was having fun and it was just a matter of time before someone wanted to settle down; inside, I started to worry that I wasn't lovable or exciting enough.

My friends were concerned. Sometime after the Brazilian, a buddy observed, "You need to be the Brazilian in your relationship." By that, she meant I needed a solid guy I could rely on. But was it possible to be stable and exciting? She had a point, but the kind of guy she described sounded so boring I figured I'd be better off getting a dog.

Then I met Peter—or, rather, re-met him. I had known Peter vaguely in college. He'd recently emerged from a divorce and onto a dating site where I'd been lurking. I passed over his profile, which depicted an earnest guy with bright blue-gray eyes wearing an old Guatemalan sweater. But he recognized me, and we started chatting. There were no witty phrases in his e-mails, no sense that he was teetering on that razor's edge between genius and madness.

Unconvinced of his romantic potential, I invited him over for soup, less a date than a get-together with an old friend. From the moment he walked in, I felt like he'd been sitting in my living room forever. I didn't feel compelled to impress him; he seemed to genuinely like my apartment, my books, my soup...and me. We laughed easily and kissed each other good night. Surprisingly, given how kind he was, I didn't want to stop kissing him. The next day, he called to ask when he could see me again—unusual behavior, considering the guys I'd dated.

On our second date, we had a quiet dinner at a bistro. On our third, he told me he was only interested in a committed relationship. I'd never heard a man say such a thing. But even though it was what I'd always said I wanted, the word monogamy sounded a lot like monotonous.

Everything about Peter was steady. He used to own a recording studio and now had a less-exciting gig as a construction manager. He had a cheerful disposition and didn't swear at drivers. He'd raised a considerate daughter who shared his quirky sense of humor. My friends told me I'd totally scored, finding a smart, handsome, 6'4" man who adored me.

By our second month of dating, Peter told me he loved me, that I was beautiful, that he liked my shoes, and that he was the luckiest man in the world to find me. We didn't always have the pyrotechnic chemistry of a one-night stand, but we had a constant warmth that made me want to cuddle up next to him. At the same time, it made me incredibly anxious: I loved hearing Peter's offbeat observations about music and architecture, watching him rewire the lighting in my apartment, listen- ing to his boyish laugh—but where was that manic streak of irresponsibility I craved? It seemed too easy. I didn't have to try to pin down an artistic, wandering soul to persuade him to love me, or clamor for his attention. Without that, the romance seemed to lose a certain thrill.

One evening, after one too many drinks, some demon took over my brain and I con- fessed that I thought he was too boring for me. I gave him a long list of all the ways he wasn't interesting enough: He was always even-tempered. He didn't come up with crazy ideas, asking me, as other men had, to take off for Argentina, ride the roller coaster in Santa Cruz, or swallow vision-inducing drugs with a shaman in the Amazon. He was predictable—showing up when he said he would, bringing flowers, picking me up at the airport. Peter looked crushed. "Are you breaking up with me?" he asked, near tears. I hadn't planned on it—inexperienced as I was with intimacy, I thought I was just airing my feelings. Breaking up was the last thing I wanted. I didn't know what I would do without his hugs and gap-toothed smile.

"No," I mumbled, embarrassed and worried that he was going to flee. But Peter pushed back. "Just because I'm not an asshole doesn't mean I'm boring," he said

"You need to figure out the difference."

Now that was interesting. He left, pissed off, and I ruminated all the next day. Peter was right. When I considered it, most of the charismatic men I'd dated were actually jerks or bad boys, hardly relationship material. They'd subtly reject me but keep me around for fun, playing games where I always ended up the loser. I suppose I'd always been attracted to commitment-phobes because some part of me felt unlovable. It was a lot easier to fall for a guy who I knew, on some level, wouldn't fall in love with me. There was nothing to risk. The real risk would be to finally be vulnerable to love.

The problem wasn't that Peter was boring. It was that I was scared to be in a real relationship. Who cared if he didn't speak three languages? Peter made me deeply happy, not constantly anxious that I wasn't good enough. His solidity was exactly why, I realized, I loved him so much.

The next day, too scared to call, I texted Peter that I loved him, too. He came over and crowed about it, then insisted I tell him out loud. Now I say it all the time. And the more he feels secure, the more he's game for new adventures: going to Patagonia and Mexico, hosting parties, learning to ski. These days, I feel silly for not realizing a long time ago what I needed: someone I could trust with my heart. And that beats a sexy Brazilian any day.