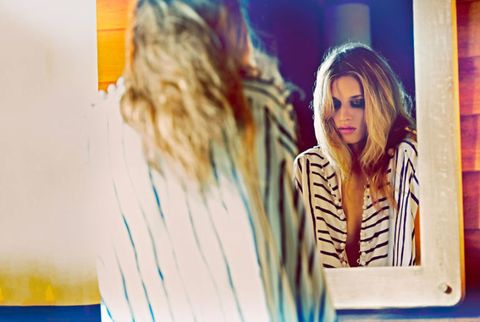 How you dress for a date on which you plan to tell the person you're falling for that you have an incurable sexually transmitted infection? I went with sensible leather flats that would transport me back to my car quickly in the Los Angeles twilight, after his inevitable "I can't see you anymore"; plain gray trousers that would modestly sheath my thighs in his presence; and an old striped top with tiny moth holes near the collar and hem, faded and worn-out, like I'd surely feel later that night. Usually I'd put more effort into my appearance for a second date. I'd comb straightening serum into my hair and swab shadow onto my eyelids. I'd wear a shirt that didn't have holes in it, at the very least. But why bother? He was going to dump me anyway.

I was once optimistic about dating. Though never a 10 on the self-confidence scale (or even—let's be honest—a perfect seven), I had enough strength to believe that the right guy would overlook my flaws. My chronic lateness? No problem! My braying anxiety? Not so bad!

But HPV is different. It's not a personality quirk I can explain away or an endearing habit a man might learn to love. It's a disease, one with symptoms that range from embarrassing to deadly—in some cases, genital warts; for high-risk strains, the possibility of cervical cancer. Some treatments can even lead to infertility. And on top of that, it's contagious.

When my doctor first told me I had two strains of HPV, low-risk (the warts) and high-risk (the cancer causer), I was struck speechless. It was the day after my 24th birthday, and I shivered on the examination table, a paper gown across my lap, clenching my knees together as my cheeks flushed red. How had this happened? I could count my sex partners on one hand. Yet after a certain point, I had trusted each enough to skip using a condom. One must not have known he was infected. So there I was, stumbling out of the drugstore into the blinding afternoon light with an expensive tube of ointment in my purse, specially formulated to kill rogue skin cells in my body's most tender region.

Most sexually active adults get [HPV] at some point, with nearly 60 million women—38 percent of the entire female population—infected at any given time.

For weeks after my diagnosis, I wallowed in a sullen bog. Given the numbers, you'd think that I wouldn't feel so alone: HPV is the most common STI in the U.S. Most sexually active adults get it at some point, with nearly 60 million women—38 percent of the entire female population—infected at any given time, according to the Centers for Disease Control and Prevention. But while 90 percent of HPV infections go away within two years and never produce symptoms, mine didn't. Small, whitish bumps mottled the inner folds of my vagina every few weeks, and my abnormal Pap smears led to two painful biopsies to study precancerous cells. I had to hum to drown out the sound of my gynecologist snipping off bits of my cervix with long, snub-nosed scissors. In the seven days until each of my test results came back negative, purple shadows formed under my eyes and I bit my nails down to the quick.

Prodded by friends, family, and my mother's polite request for grandchildren, I eventually worked up the nerve to start dating again. I filled out an online profile and soon found myself trading e-mails with a bumbling, sincere computer programmer named Mike, who admitted a weakness for Hello Kitty, chili fries, and rare birds. Near the end of our second marathon phone call, he said, "At this point, I wouldn't care if you had two heads." What about an STI?

On our first date, he snatched my heart from its shroud over spicy tuna and shrimp rolls at a tiny restaurant a few blocks from the beach. I tucked my fingers into the crook of his arm and touched his lustrous brown curls. After dark, we padded onto the sand and kissed under a patient moon.

The next day, my brain roiled with conflicting visions of our future. Like waves crashing against a seawall, my desire collided with the barrier of my still-hidden illness. "This is the coolest date-and-a-half I've ever had," Mike said that evening. Just wait, I thought. We made plans to meet for dinner the next night. No question, this was when I would have to tell him. Even though HPV is commonplace, that doesn't make it palatable, especially with a cancer warning attached. He might find me attractive, but would he still want to sleep with me?

As I parallel-parked near his building that afternoon, my impending admission felt like a 2-ton anvil on my shoulders. Up in his apartment, I excused myself to go to the bathroom and practiced my not-about-to-cry look in the mirror. Then I crossed the living room and sat next to him on the couch. "OK," I said. "I have to talk to you." He nodded as my confession tumbled out. He said "Mm-hmm" a couple of times. He placed his hand on my knee. Then he pulled me close. Great, I thought, a good-bye hug. "Being nice to me now will only make it harder," I managed to croak.

But his next line surprised me: "If we don't work out, it'll be for regular reasons, not for this." Relieved, I sobbed into his freshly laundered sleeve, staining it dark and slick, marveling that this sleeve was still available for me to slobber on. He had questions: Is it uncomfortable? (Not really.) Will it ever go away? (It might, but no one knows when.) Yet he didn't judge me. He still wanted to see me—and perhaps do more than see me, I realized, by the way his lips brushed my neck later that night. In fact, the outcome that came to pass was the only one I hadn't allowed myself to imagine.

Now that we're engaged, I think of that night with Mike often. Since we're monogamous, we no longer use condoms. My HPV hasn't interfered with my ability to have kids, so the only question now is when. Yet I still remember hiding behind my hair as I told him what it meant, and how the last thing I wanted was to expose him to the same nagging risk—the risk of warts, of passing it on, of shame. I remember how my fingers toyed with the holes at the hem of my shirt. But the more I think about it, Mike wasn't looking at my tattered attire. His eyes lingered on what lay beyond it: a human girl full of worry and love, warm and vibrant and whole. He saw the person cowering behind the disease. I'm glad I finally did, too.

"HPV isn't a personality quirk I can explain away."

This content is created and maintained by a third party, and imported onto this page to help users provide their email addresses. You may be able to find more information about this and similar content at piano.io
Advertisement - Continue Reading Below
More From Love & Sex
Satisfyer Vibrators Are Under $40 for Prime Day
Real Women Share Their Favorite Sex Positions
Advertisement - Continue Reading Below
My Abuser Cyberstalked Me
Swipe Right on Privacy
The All-Time Best Vibrators, Reviewed by Experts
Behold: A Sex Playlist That Won't Make You Cringe
The 60 Best Cheap Date Ideas
Second Date Ideas That Aren't Cliché
The Best Dating Apps for People Who Hate Them
20 Ways to Be a Better Kisser