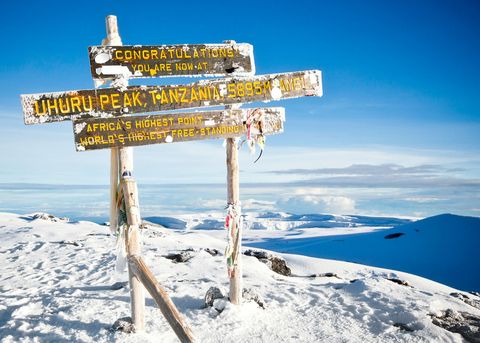 No one needs to trudge up a 19,341-foot mountain. But I wanted to both celebrate a big birthday and challenge myself physically and mentally, so I decided to climb Mount Kilimanjaro. In January 2009, I flew to Tanzania, where I linked up with my hiking group, which included a couple, a father-son duo—and six solo women.

What is it about Kili that calls to the single woman? Maybe it's because there are no ropes or pickaxes involved. Fitness-wise, it means walking four to eight hours a day for six days, largely uphill—not especially difficult. But this doesn't mean it's painless. The landscape and ecosystems change rapidly. One minute I was stripping down to a T-shirt; the next, we were battling snow and wind. And when you're up that high, the dizziness and nausea make you feel as if every breath might be your last.

At midnight on the final night, I zipped up every piece of clothing I had. For the next eight hours, we plodded straight up. I stumbled every few feet, sometimes crawling on my knees, even throwing up. I didn't know if I could do it. But when I saw that famous sign, I was grateful I hadn't given up. I'd learned firsthand just how tough I really was. Best of all, I wasn't proving anything to anyone but myself.

Or climb this: The highest peak in Peru's Inca Trail to Machu Picchu is a mere 13,800 feet.

Be prepared to: Train. For the year before my climb, I took staircases religiously and did the stair-climber wearing 15 pounds of weights.

My No. 1 piece of advice: Climb right after your period! Cramps (and zero showers) are no fun at high altitudes.