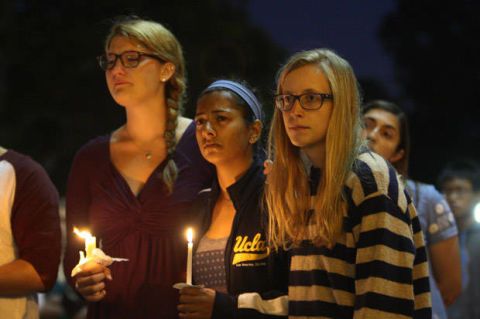 Less than a week after a 22-year-old student at the University of California – Santa Barbara killed six people and wounded 13 before taking his own life in a hate-fueled rampage, people are asking whether Elliot Rodger can be dismissed as a deranged madman or if he was motivated by deeper cultural messages about masculinity and entitlement. In the video outlining his plans to "slaughter" sorority members at a house on campus, he said, "College is the time when everyone experiences those things such as sex and fun and pleasure. In those years, I've had to rot in loneliness. It's not fair. I don't know why you girls aren't attracted to me. But I will punish you all for it... All of those girls that I've desired so much, you will finally see that I am, in truth, the superior one, the true Alpha male." Psychologists have called Rodger a narcissist with delusions of grandeur and an entitled misogynist who believed he had been denied what he rightfully deserved: sex.But is Rodger's misguided manifesto really so unique, or does it tell us something about our culture?

Of the more than 70 mass shootings occurring in the U.S. since 1982, only one of the killers was a woman, according to Mother Jones. And outbursts of violent masculinity, especially acts rooted in misogyny, are becoming more common, with almost half of the mass shootings happening in the last eight years, and seven in 2012 alone. Then there are the incidents that don't make national headlines, like the high school senior in Connecticut who stabbed to death a classmate who declined his invitation to prom last month. "A large part of mainstream masculinity is learning to see women as objects," says Laci Green, a YouTube creator who discussed Rodger and the epidemic of masculine entitlement on her channel this week. From stalking and rape to garden variety street harassment and catcalling, our culture sends a message that men are entitled to women's bodies and their time, Green says. "Elliot is the monster that we as a culture, as a society, have created," she says. "Why is it so hard to admit that misogyny actually kills people?"

Though Rodger showed clear signs of mental illness, his embrace of certain deleterious cultural values is evident. "His messaging is straight out of a men's rights advocacy handbook," says Lisa Kaplin, Psy. D., a psychologist and life coach in Chicago. "But it's not just pick-up artist and men's rights websites that disseminate an attitude of male entitlement: the idea that men are owed sex is everywhere, from the movies we watch to the music we hear to the headlines we read. Even in romantic comedies, Kaplin says, the messaging can be subtle, but it's there. "The wording we use around dating – saying we're going to catch somebody – suggests that men are entitled to sex with women." Even more damning, it's a message that girls may be internalizing as well. Even a classroom of sixth graders – boys and girls – have agreed that men may be owed sexual favors in certain circumstances, such as if a couple has been dating for a while or if a man helps a woman fix something in her house, Kaplin adds. Women, on the other hand, are encouraged to behave, to play nice, sit down and be quiet. The lack of prevailing violent tendencies among women is likely a combination of hormones and environment, she says. "Women look to connect, versus disconnect. If you're connected, how likely are you to be violent to somebody?"