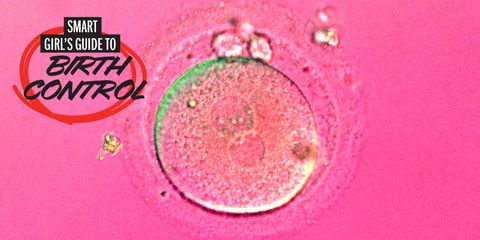 My husband and I met during my freshman year at our Jesuit university. Curious and spiritual, we discussed religion a lot during our courtship, and gradually started becoming more interested in Catholicism. We converted right before we married. Twenty-two and in love, we started our marriage as practicing Catholics with everything that entailed: weekly mass, confession—and no birth control.

Since I was a practicing Christian when we met, birth control was a non-issue. I was "saving myself" for marriage. Like most Christian girls, I struggled with chastity throughout dating and engagement, looking forward to marriage as a sexual free-for-all where I could pick a form of birth control to my liking and fornicate all I wanted. But during our conversion, we realized that anything that intentionally divorced sex from procreation—birth control, pulling out, a blowjob—was a no-go. For practicing Catholics who wanted to avoid a pregnancy, total abstinence or something called Natural Family Planning (NFP) was the only licit option.

Natural Family Planning, we learned, was simply tracking the fertile cues that women's bodies already exhibit, like vaginal fluid, cervical position, and morning (basal) body temperature. NFP grew on me. I liked that it respected what a woman's body did naturally, instead of altering it, like a hormonal method would. I liked that we would be active participants, tracking and discerning my body's signs as a couple, instead of me, alone, popping a pill. And I liked that it was free. The efficacy rate, if followed perfectly, was high—anywhere from 95 to 97 percent, according to my research. We weren't adverse to having a baby if we accidentally mistook a fertile sign for an infertile sign, so why not try?

We started off each morning with a sweet newlywed ritual: Before work, my husband would pop a thermometer in my mouth and record my temperature on a chart we kept in our roll-top desk. Other symptoms went in the chart as well. High, tight cervix? (You can find the position of your cervix by inserting two clean fingers into your vagina.) We put that in the chart. Creamy, sticky vaginal secretions? That went in the chart, too. I reported the signs, and my husband tracked them methodically on our chart. It was exactly what we had read about in the textbooks. Dryness and low temperatures indicated infertility, while wet vaginal sensation, an open cervix and a temperature spike meant that ovulation was near. A long string of high temperatures, something we encountered just a few months into charting, likely meant a baby was on the way. We discovered our pregnancy through our chart, days before a drugstore pregnancy test yielded a positive result.

It was fascinating and gross and a little embarrassing to watch my body change in such lurid detail. Laid out, my chart looked like a bell graph, with the temperatures ascending and descending as my fertility waxed and waned. I saw that I ovulated, and knew (due to a sudden temperature drop) that I would get my period the next day. When I did, I felt a rush of pride. Look what my body can do, completely on its own! I didn't need a pill to regulate my fertility.

But month-to-month, using NFP became challenging. After we had two children, we decided we needed to take a break, which meant plenty of abstinence to minimize the risk of another pregnancy. Women typically feel the most aroused during their fertile days, so if we want to avoid a pregnancy, we can't have sex when I most want to. And anything that doesn't culminate in intercourse is off limits, so our only recourse then is the slow burn of total abstinence.

It's worked for us, because it's kept us from having a baby when we didn't want one, and it's showed us how to easily conceive when we did. We still both feel that the Church's teaching on contraception is right and true. But using NFP is hard, sometimes joyless, and it requires a lot of sacrifice for painfully little sex. Is it worth it? We ask ourselves. Is it good for our marriage? That remains to be seen.

Find a method that fits your lifestyle here.

This article is part of the Smart Girl's Guide to Birth Control package of the June issue of Marie Claire, on newsstands now.