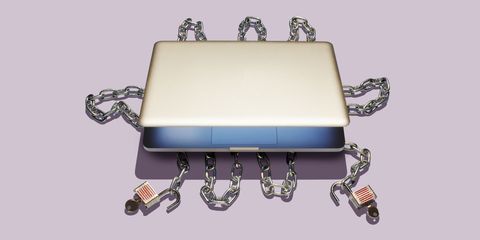 It's been a bad week for adulterers. On Tuesday, hackers calling themselves the Impact Team flooded the internet with a massive amount of information stolen from Ashley Madison, a notorious hook-up site for cheaters that bills itself as "the world's leading married dating service." According to security specialists, the data dump covers 33 million accounts and includes e-mail addresses, user profiles that detail secret desires and sexual preferences, and, in many cases, credit card transaction information, including real names, addresses, and phone numbers. The hackers followed up on Thursday with a leak of internal Ashley Madison files, including the e-mails of the CEO.

How has the internet responded to this unprecedented gush of extremely sensitive information?

With a collective shrug. Eh, whatever.

The reactions fall into three broad categories. The first is satire, of course. "For a modest $500 fee I will tell your spouse I'm the guy who stole your identity and created that fake profile," tweeted comedian John Fugelsang. "Looks like Christmas came early for divorce lawyers!" crowed another Twitter user.

The second reaction is rampant glee over the prospect of uncovering yet more misbehavior by politicians, celebrities, and the professionally righteous. (On Wednesday, reality star Josh Duggar became the first boldface name to be disclosed in the hack, further damaging his already dodgy reputation.)

The third type of response focuses on the hack's troubling implications for privacy. The Economist observed that the incident "illustrates, more vividly than ever before, the woeful state of internet security." Melissah Yang at Bustle wrote, "Look past questions of infidelity and lifestyles these people chose to make, and instead realize that no one, including yourself, is safe from a massive hack." Or, as Michael Miller at the Washington Post put it, "the Ashley Madison leak is about a lot more than infidelity."

There were 33 million accounts—that's more than the entire population of Texas.

That's true. But look: It's still about infidelity.

Of course, not every one of those 33 million is a cheater. Some accounts are fake. Some users likely had permission from their spouses to have sex with other people, or signed up but didn't manage to find a partner in crime. Others were plain old looky-loos, including me. (I'm a novelist who writes about infidelity—it was research, Mom, I promise.) But keep this in mind: Ashley Madison is only one of many websites that cater to restless marrieds. And the internet is only one of many ways human beings have found to screw around.

In other words, infidelity is everywhere—and now, it's impossible to ignore.

We know this, of course, but boy do we hate to talk about it. Cheating is scary. It makes us extremely uncomfortable. So we deflect. We joke, and gawk at the famous, and scorn all those skeevy assholes. Above all, we loudly and proudly state our conviction that infidelity is, in all cases, a totally and completely inexcusable surprise.

The Ashley Madison debacle is proof that we need to rethink that conviction. The leak is just too big. It implicates too many people. Are we honestly prepared to dismiss a large portion of the human population is indisputably horrible? Or should we step back, suspend our knee-jerk judgments, and consider the possibility that cheating wouldn't be so common if monogamy weren't so damn hard?

Because it is hard. Monogamy is our romantic norm, the only socially accepted way to love. Most of us buy into it wholeheartedly. We plan our big white weddings and our happily-ever-afters, assuming nothing will change, because we're in love. And love means one plus one equals two—and only two—forever.

In a weird way, the millions of people caught up in the Ashley Madison hack have done the rest of us a favor.

But for many people (including some of the 33 million we know of, and countless others we don't), sexual fidelity involves a profound battle between their moral selves and their animal selves. They know cheating is wrong . . . and yet they desire. As an increasing number of scientists think we are wired to do. Some of them end up cheating—not because they're awful people, not because they don't care, but because they're having serious difficulties with monogamy, and cheating seems like the best of a bad set of options.

Sure, there are plenty of douchebags and creeps out there. But there are also normal, decent people trying to solve a life problem covertly, so as not to make their loved ones suffer.

I know the rebuttal argument. Nobody forced those cheaters to marry and be monogamous. They made a promise, which they should have kept. Instead, they deceived and betrayed. But nobody can reasonably believe that every single one of those 33 million people intended to break their wedding vows the day they made them. Sometimes, it's just that something goes wrong between "I do" and "Oh my god what the f*ck did I do?"

In a weird way, the millions of people caught up in the Ashley Madison hack have done the rest of us a favor. Taken together, their individual lapses have highlighted an issue much bigger than they are: that our romantic conventions are a poor fit with our human frailty.

And actually, this could help us all in the long run. Now that we're faced with the largest exposure of infidelity in history, maybe we'll start to seek out more honest conversations about monogamy and whether it suits our animal selves. We may, hopefully, learn how to communicate better with our partners about what we want our happily-ever-afters to look like, and how we're going to deal if they go awry. Eventually, maybe we'll even react to salacious leaks like this one with a collective shrug.

Kidding. We'll always freak out. After all, we're only human.

Eliza Kennedy's first novel, I Take You, was published in May.