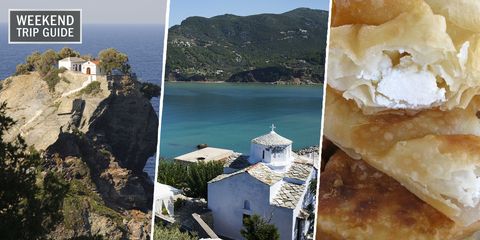 If you've ever seen the movie Mamma Mia!, then you've seen the pure paradise that is the island of Skopelos. The idyllic island is exactly what you picture when someone says "paradise"—perfect blue skies, sparkling, clear turquoise waters, secluded beaches, cobblestone streets, you get the idea.

Of course, if you've seen Mamma Mia!, then you probably also remember that it takes place in Greece, and yeah, Skopelos is an island of Greece. While Greece is, admittedly, a bit of a trek for a weekend trip, there aren't many more beautiful places on this planet to spend 48 hours of your hard-earned vacation time.

If you find yourself planning a jaunt to the Greek isles (which, if we're being totally candid, you really should be), here's a guide of where to stay, and what to do, eat, and see when you're on Skopelos.

When it comes to picking a place to stay in Skopelos, the biggest factor in your decision should be just how big of a Mamma Mia! fan are you. Does it seem like I'm mentioning Mamma Mia! a lot? If that's a problem for you, Skopelos might not be the best place for you to visit after all. It's the island where the first Mamma Mia! movie was filmed. Fun fact: Croatia stood in for the island in the sequel (which is out now in every format you could want it in) much to the chagrin of locals or at least to the cab driver I met who spent the better part of 20 minutes explaining, in detail, how the Mamma Mia! Here We Go Again producers had single-handedly destroyed the Skopelos economy by not filming the second movie there too. After the first movie, Skopelos enjoyed a huge tourism boom, thanks to fans who wanted to see the filming locations and experience the ABBA-fueled romance for themselves.

So, what does this have to do with where to stay? Well, if you're Mamma Mia! fandom level is low-moderate, it doesn't get much better than the Adrina Beach Hotel or the neighboring Adrina Resort & Spa. Both properties are gorgeous, with cozy rooms, delicious on-site food options, and a full-service spa.

And if your Mamma Mia! fandom level is high, you can book a stay at the Skopelos Village Hotel, which is right in the middle of town and happens to be where the cast of the movie stayed during filming. There are pictures of Meryl Streep & co. on the walls to prove it.

Where to Eat and Drink

If you visit Skopelos, you have to try the local specialty: The cheese pie. The word "pie" is a little misleading—it's really just a ring of deep-fried cheese. Behold:

This isn't a giant mozzarella stick (although that would also be a pretty great local specialty). It's flaky and light and just...do yourself a favor and book your trip already.

Like I've already said, if you like Mamma Mia! you'll have a great time in Skopelos. Even if you don't like Mamma Mia!, the movie's iconic filming locations aren't a bad place to start when planning your day because they're some of the most breath-taking places on the island.

You can't miss the The church of Agios Ioannis Kastri. Perched atop a high cliff, you'll have to climb 110 stairs carved in stone to get there.

It's even more beautiful if you go at night:

If you want to lounge on one of Skopelos' many picturesque beaches, it doesn't get better than Kastani Beach (which, yeah, is also a Mamma Mia! filming location, as a bonus if you're a fan of the movie).

1. If you're planning a trip to Skopelos, be prepared to work to get there. You'll have to fly into the larger island of Skiathos and then take a water taxi to Skopelos. It's a lot of work, but it's worth it.

2. Be prepared to disconnect fully. Even if you pay for an international plan on your phone, you're looking at spotty to terrible service. The good news is that you won't really care about texting when you're surrounded by absolute beauty.

3. Pack sturdy shoes. Even though this is and island paradise, some of the best things to do (like the hike up the stairs to the church of Agios Ioannis) involve a lot of walking.

Related Story
Weekend Travel Guide to Saint Lucia
Kayleigh Roberts Contributor Kayleigh Roberts is the weekend editor at Marie Claire, covering celebrity and entertainment news, from actual royals like Kate Middleton and Meghan Markle to Hollywood royalty, like Katie Holmes and Chrissy Teigen.
This content is created and maintained by a third party, and imported onto this page to help users provide their email addresses. You may be able to find more information about this and similar content at piano.io
Advertisement - Continue Reading Below
More From Travel Guides
Add St. Lucia to Your Post-COVID Bucket List
Explore the Luxe Private Island of Cayo Espanto
Advertisement - Continue Reading Below
Andros Is the Most Underrated Spot in the Bahamas
No Clue Where to Go in Turks & Caicos? Start Here
Over Cabo? Head to Punta de Mita, Mexico, Instead
The Instagram Guide to Lake Tahoe
Head to These Destinations for a Late Fall Getaway
The Insta-Worthy Places to Visit in October
Where to Stay, Eat & Explore in Sag Harbor
The Instagram Guide to Coronado, California