Last week, the internet learned that Bella Hadid talks like she's doing one long audition for 21 Jump Street. Before we reveal why this is relevant, let us first revisit her legendary Complex interview because it is a terrific waste of seven minutes, plus you could time the pause between the "gonna" and "like" in the "homeboy's gonna, like, get it."

But there's another reason to pay special attention to Bella Hadid—and that would be her hair in this video, which is worn flipped out at the ends like we used to do in the late '90s/early aughts! Gah! It's baaaack. 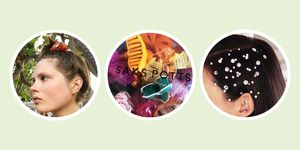 '90s Throwback Hair Accessories Are Back

This isn't the first time Bella has pulled out ye olde wrist flick with a flatiron or round brush (provided you have the dexterity to end up with a smooth curve and not a hard angle). At an event in Paris last month, she put a wet-look spin on the same style this writer once spent 45 minutes trying to tamp down in a play area by mashing her head against the plastic floor. (Age seven was a weird time for me.)

Although Bella Hadid has basically Napoleon-ed herself empress of this throwback—which, by the way, aligns with her aesthetic of "Clueless extra/original Super/Instagram streetwear brand ambassador"—she is not alone in her charge. Never forget that it was Rihanna who resurrected the preferred hair of rom-com actresses in 2002...at the 2015 Met Gala.

So hypothetically, if someone who did not appreciate her Reese Witherspoon flippies properly the first time around were interested in giving it another go, how might she make sure it looked as modern as possible? Beauty-wise, boo-boo, the way to go about it now would be blunt ends versus ultra layered, so you have a shiny fan, not feathers. But of higher importance is the fashion, which should be as of-the-moment as you can manage without turning into a caricature of, well, Bella Hadid. Whip out those tiny Keanu sunglasses. That skater-y hoodie you waited on line at a secret pop-up for four hours to buy. Or better yet, just reserve it for evening wear, for which time moves more slowly, so you can go out in an old black dress and old-new hair and still feel completely fresh.

Chelsea Peng I'm Chelsea Peng, the assistant editor at MarieClaire.com.
Advertisement - Continue Reading Below
More From Beauty
Hourglass' CEO Shares Her Morning Beauty Routine
All the Details on Brow Lamination
Advertisement - Continue Reading Below
These Makeup Trends Will Dominate the Year
Yes, You Need a Silk Pillowcase
WORTH IT: La Mer Renewal Body Oil Balm
Shampoos to Make Your Hair Grow Super Fast
These Are the 3 Lipsticks I'm Obsessed With RN
The New Fragrances You Need to Try This Year
Blake Lively Looks So Different With a Bowl Cut
It's Winter, You Need One of These Lip Balms