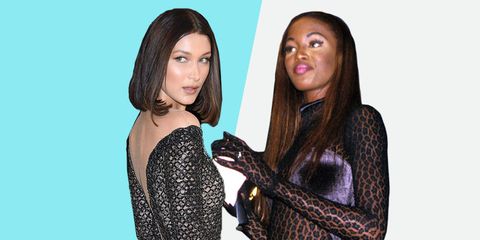 Every time Bella Hadid goes outside wearing clothes, senior culture editor Mehera Bonner and I come close to blows because we both have strong opinions about denim, and she has no idea what she's talking about. But is it possible we've (almost) been too distracted by the dangerously close-to-JNCOs-voluminousness of her pants to realize the long game she's playing? One that shows both the awesome, persona-crafting power of clothes and Bella Hadid's own ambition? Hang on—have to go argue with a certain someone about her thoughts on cropped, flared jeans.

Reaching a high point on her heavily '90-influenced fashion tour over the weekend, Hadid trotted out her most referential outfit yet: a fur-trimmed cardigan and leather mini from her collaboration with Chrome Hearts, a crucifix necklace, Saint Laurent pumps, and barrettes holding her swingy, well-brushed Met Gala haircut back.

The easy comparison is Cher Horowitz, but remember that she was a Cindy Crawford stan, so *that* is the real allusion here—the Supers, that breed of fun-loving, cocky Amazons some say have gone the way of the dodo.

While Kendall Jenner does the streetwear thing—with an occasional, cheeky nod to Paris Hilton, her older sister's former employer—Hadid's looks have always been a bit more of a specific throwback. But to what end? One possibility: shaping her legacy—not as a "social media model," but as one of the greats.

Just as all of us proclaim our allegiance to specific groups with what we wear, Hadid, by dressing like Naomi and Kate and Linda, connects herself to an exclusive club, one that no longer accepts new members—or possibly even exists at all. And with that boring, ongoing brouhaha over who deserves the title "supermodel," stepping out in the guise of one is kind of brilliant and something of a "f—k you."

Of course, the clothes can't literally make the woman, but they sure can help with the image of one. So it all comes (subtly) full-circle with what Kendall Jenner wrote on her website in response to Stephanie Seymour's comments, with one important amendment: Hadid is certainly a model of the time. But she might have her sights set on being a model of all time.

Chelsea Peng I'm Chelsea Peng, the assistant editor at MarieClaire.com.
This content is created and maintained by a third party, and imported onto this page to help users provide their email addresses. You may be able to find more information about this and similar content at piano.io
Advertisement - Continue Reading Below
More From Fashion
Leather Skirts Are an Edgy Wardrobe Must-Have
Back to Basics: How To Build a Minimalist Wardrobe
Advertisement - Continue Reading Below
Michelle Obama Stuns at Biden-Harris Inauguration
Jaclyn Rothenberg Pursues Pantsuits In Every Color
What to Buy From Madewell's Secret Stock Sale
What Biden's Family Wore on Inauguration Night
Your Girlfriend Will Approve of These Chic Gifts
The Softest, Coziest, Warmest Socks You Can Buy
Why Everyone Wore Monochrome to the Inauguration
See Kamala Harris's Sequin Inaugural Concert Look